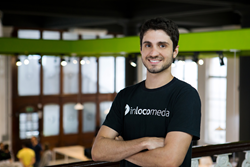 "For mobile app developers, we increase the time and money consumers spend on their apps," says Andre Ferraz, In Loco CEO. "Most consumers who download apps don't come back and use them."

A new age of ubiquitous computing is emerging. In Loco, a location-intelligence software innovator born in Brazil, intends to be a major global player in that future. Founded in 2014, In Loco is a location-technology pioneer across several segments such as mobile apps and fraud prevention. It’s now expanding into the U.S. with the planet’s most accurate location-intelligence technology and a new mobile-app engagement software offering that lets brands and retailers entice shoppers with in-context offers on mobile devices that inspire them to act, more frequently engage with their apps, and reduce their frustration.

Unlike other alternatives, like hardware-based beacons or GPS technology, In Loco provides greater precision and less cost, hassle and maintenance. In Loco’s technology is 30 times more precise than GPS and is privacy-friendly because it generates 100 percent anonymized data, per Microsoft Research. Its vision is to create a universal, benevolent computing platform that will be all around us without us even realizing it for an evolving world that’s quickly moving into a more connected Internet of Things (IoT) era.

“What In Loco stands for is bringing convenience and privacy together for consumers. For brands, we provide location intelligence that’s non-invasive but increases marketing relevance and consumer response. For app developers, we help them boost app engagement and better understand and predict their users’ behaviors in real-world locations, so apps can engage consumers at the right context to increase relevance and value creation,” says André Ferraz, CEO of In Loco.

In Loco’s location tech company in Brazil has been tapped by some of the world’s largest companies. Global brands using it today include Coca Cola, Electronic Arts, Jaguar, L’Oreal, McDonalds, Nissan and P&G. Last summer, the fast-growing company closed a deal with Clear Channel to tap its growing network of 65 million mobile devices and sync them to out-of-home (OOH) displays in public spaces across Brazil.

“In Loco’s location-intelligence technology is a strategic asset to Nissan because it assertively maps consume behaviors in the real world,” said Juliano Fortini, marketing analyst, Nissan Motor Corporation in Brazil. “Thus, our team is able to understand which mobile ads generated the most visits to auto dealers so we can optimize our strategic decisions and mobile-marketing spend."

The company’s new In Loco Engage™ offering lets app developers easily design, launch and analyze the performance of customized offers to shoppers who are more likely to engage because of enhanced knowledge of their physical location and current context. It allows developers to test In Loco’s features before integrating the SDK into their own apps. Currently available for free on Google Play, an iOS version of In Loco Engage will be available on the App Store later this summer.

“For mobile app developers, we increase the time and money consumers spend on their apps,” says Ferraz, In Loco CEO. “Most consumers who download apps don’t come back and use them. With In Loco Engage, mobile apps know the most relevant moments and context to engage users. It reduces user frustration at getting the wrong offer at wrong time, like game notifications at work.”

With the latest version of In Loco Engage, brands can now boost mobile-app engagement and reduce consumer annoyance at out-of-context offers based on where they’re located. A new feature called Visits Analytics™, launching this month, lets marketers understand users’ offline behaviors anonymously for insights on when and where, collectively, shoppers most frequently visit various retailer categories such as restaurants, auto dealers and jewelry stores. They can narrow the analytics insights to cities, states or countries using the new In Loco Engage analytics feature.

You can view a short video about In Loco Engage here.

About In Loco
In Loco provides the most accurate location intelligence paired with innovative software offerings without the cost, hassle and maintenance required by hardware-based beacons. Its technology predicts consumer behavior and intent based on precise, aggregated data from the physical world. With its new In Loco Engage offering, it’s making it easier for brands and retailers to engage with shoppers in-context with a high degree of relevance to inspire them to act without the need to share their sensitive personal information and data. For more information, visit: http://www.inlocoengage.com