Mediaplanet’s Lung Health campaign, found within USA TODAY and online, aims to raise awareness on the third-leading cause of death in the United States. 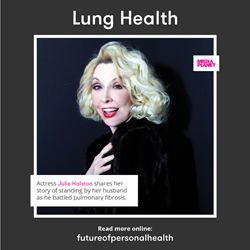 Lung disease is the third-leading cause of death in the United States, affecting nearly 34 million Americans living with some form of chronic lung disease.

Lung disease is the third-leading cause of death in the United States, affecting nearly 34 million Americans living with some form of chronic lung disease. Despite these daunting figures, we are heading towards a bright future of better lung health due to advancements in early detection and treatment for every form of lung disease. This campaign will reach both patients and professionals alerting them to the innovative tools available to aid those suffering.

In conjunction with the respiratory community’s leaders, this campaign educates readers on some of the most serious lung health issues such as lung cancer, pulmonary fibrosis, asthma and COPD. Including Broadway Star and Actress Julie Halston’s empowering story of how she turned her husband’s fatal diagnosis of idiopathic pulmonary fibrosis and her close friend’s passing due to the disease into a yearly event to raise awareness and money for research through the Broadway Belts for PFF! Fundraiser, “Lung Health” brings together a community of doctors, patients and loved ones who are working to help Americans protect and treat their overall lung health.

The print component of “Lung Health” is distributed within the June 22nd regional circulation of USA Today with a circulation of approximately 250,000 copies and an estimated readership of 750,000 within the Atlanta, Chicago, Dallas, Los Angeles, New York and Washington D.C., Baltimore markets. The digital component is distributed nationally, through a cast social media strategy, and across a network of top new sites and partner outlets. To explore the digital version of the campaign, click here.

About Mediaplanet
Mediaplanet is the leading independent publisher of content-marketing campaigns covering a variety of topics and industries. We turn consumer interest into action by providing readers with motivational editorial, pairing it with relevant advertisers and distributing it within top newspapers and online platforms around the world. Our award-winning stories have won the hearts of countless readers while serving as a valuable platform for brands and their missions. Just call us storytellers with a purpose. Please visit http://www.mediaplanet.com for more on who we are and what we do.