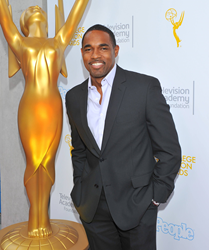 Actor Jason George (Grey’s Anatomy/Station 19) kicked off a Prizeo online sweepstakes today (prizeo.com/EMMYs) in which one lucky TV fan and their guest will win a VIP trip to Los Angeles to attend the 70th Emmy® Awards.

For the second consecutive year, Prizeo, the online sweepstakes-for-good platform, is partnering with the Television Academy Foundation to offer this opportunity-of-a-lifetime to raise funds for the Foundation’s renowned educational programs.

With just a $10 donation to the Television Academy Foundation via prizeo.com/EMMYs, made between June 26 – September 1, 2018, fans will automatically be entered to win this ultimate 70th Emmy Awards experience at the Microsoft Theater in Los Angeles on Monday, September 17, 2018, which includes:

In addition, George is offering the sweepstakes winner and their guest a chance to start their VIP Emmy Experience at his side on the Red Carpet before the telecast begins. After viewing the show from some of the best seats in the house, the winner and their guest will attend the star-studded Governors Ball after-party.

“The Television Academy Foundation is doing vital work to create a more inclusive industry through their fantastic education programs,” said Jason George. “That greater diversity on both sides of the camera will change the way the next generation sees the world and themselves. I’m proud to partner with the Foundation to get the public engaged with their efforts, and take one lucky winner and a guest to the Emmys!”

“Prizeo is especially honored to offer this truly one-of-a-kind experience to TV fans around the world,” said Lauren Werner, General Manager, Prizeo. “Our goal is to make a significant financial impact for the Television Academy Foundation so it can continue its important work while also providing an amazing experience for the winner of the campaign, who can give small and win big.”

“Our sincerest appreciation to Jason George and Prizeo for their support,” said Jodi Delaney, executive director of the Television Academy Foundation. “Together, we are dedicated to preserving the illustrious oral history of television while inspiring and educating those who are shaping its future.”

About Prizeo
Prizeo, an online sweepstakes-for-good platform, mobilizes celebrity fan bases by offering the chance to “give small and win big” while raising funds and awareness for charitable causes around the globe. Prizeo campaigns have featured celebrities such as Lin-Manuel Miranda, Ellen DeGeneres, Tom Brady, Martha Stewart, Imagine Dragons, Tyler Oakley, Lady Gaga and many more. To date, Prizeo has raised more than $50 million for hundreds of charities, including Planned Parenthood, American Cancer Society, United Way Worldwide, and Special Olympics.

Prizeo is a member of Charity Network. Named one of Fast Company’s 2017 Most Innovative Companies, Charity Network is also parent company to Charitybuzz, an online charity auction platform; Chideo, a cause-meets-entertainment content company; and Global Philanthropy Group, a strategy consulting firm for cause. To learn more, please visit http://www.prizeo.com.