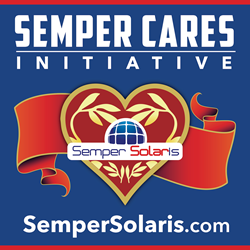 Once a Marine, Always a Marine. Semper Fidelis means watching out for your fellow soldiers and lending a helping hand.

In partnership with local veteran support charities, California’s fastest growing licensed solar and roofing contractor, Semper Solaris, is celebrating Independence Day by giving back to veterans in need. On Tuesday, July 3rd, Semper Solaris will be visiting the home of veteran Carl Schaffrina revealing a brand new roof and solar panel system in conjunction with former Marine sniper Povas Miknaitis’ reveal of his complete solar panel system. These two projects combined provide donations of over $75,000 worth of services and equipment. Semper Solaris, a member of INC 5000’s Vet 50, is owned by former Marine Captain Kelly Shawhan and his business partner, John Almond. Giving back to veterans is part of the make-up within this company; they have made a commitment to hire as many former military as possible while fostering the ideals of the Marine Corps in their work.

Currently, Carl Schaffrina’s roof is in serious need of repair, water leaks have been proving physically and mentally demanding for the family. Semper Solaris, in partnership with the Owens Corning Roof Deployment Project, is providing a complete new roof installation expected to last for more than 25 years. The goal of the Roofing Deployment Project is to show gratitude and honor veterans. All the partners have worked together on this project to see that this deserving veteran is provided with a quality roof over his head for many years to come. In addition, Semper Solaris has partnered with Panasonic of North America and SolarEdge to design a state-of-the-art solar system. Panasonic is donating all the solar panels provided to Carl and his wife, Jodi. SolarEdge has generously donated the DV-AC inverter hardware to complete the system. This project is being coordinated with San Diego Habitat For Humanity’s Veteran Project.

Former Marine sniper Povas Miknaitis, is being given the opportunity to Declare his Independence from the electric company this year. Semper Solaris, in cooperation with SolarWorld, and SolarEdge, will be installing a complete solar panel system to his home in San Diego. This new system will help reduce electricity costs and improve home value. Lower electricity bills and energy independence are especially valuable for disabled veterans on fixed incomes, one fewer bill means greater financial freedom. The Miknaitis project is being coordinated with San Diego’s Warrior Foundation Freedom Station where Miknaitis was a beneficiary and is now a volunteer working with other wounded veterans.

On July 3rd, both projects will be completed and unveiled to the public. Press and guests are welcome to join the families and crew to celebrate these veterans and watch as the final solar panels are installed. There will be two unveiling celebrations, one at each residence. The first will be at 10:00 A.M., and the second at 1:00 P.M. Location specifics for each project are available in the Semper Solaris Living Electronic Press Kit. . All partners involved look forward to celebrating the Fourth of July and the United States of America, by honoring those who have made the independence and freedoms of the U.S. possible.

Established in 2012, Semper Solaris is the fastest growing licensed solar and roofing contractor in California. Semper Solaris is locally owned and operated by a team of veterans and inspired by Semper Fidelis, the Marine Corps motto meaning “always faithful.” Semper Solaris is built upon the military ideals of duty, respect, selfless service, honor, integrity and personal courage. Semper Solaris hires as many former military as possible and projects such as the Semper Cares Initiative gives the company the chance to give back to the San Diego community and our former military in. More information on Semper Solaris can be found at their website, http://www.SemperSolaris.com.

If you would like more information on this topic, please contact Stillwater Agency at 888-519-5149 or Mike Anderson at anderson@stillwateragency.com. For the most current information regarding the projects, please access our Living Electronic Press Kit with biographies, background information, images and video. The LEPK will be continually updated with new and exciting information about the projects and all video and material has been cleared for use in all mediums.