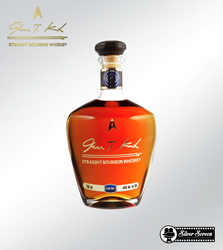 Star Trek fans will soon have a new way to relax and enjoy their favorite episode or film. Under license by CBS Consumer Products, Silver Screen Bottling Company will launch a Star Trek branded spirits line. The first spirit, James T. Kirk Straight Bourbon Whiskey, will debut on June 27. An opportunity to purchase this limited release small-batch bourbon can be found at http://www.JamesTKirkBourbon.com.

Star Trek “behind the scenes” veteran, graphic designer, Mike Okuda lends his contributions to the development of this very unique spirit.

About The Whitener Company
The Whitener Company™ is a diversified consulting & investment company specializing in the media, sports, and technology spaces. The company provides expert consulting services in the areas of marketing technology, event production and management, sponsorship sales, and business portfolio management and acceleration. The Whitener Company™ assists clients in building and executing strategic options for growth and capital needs. The company operates around the world and has offices or portfolio companies in Hollywood, Dallas, Chicago, New York City, Charlotte, Atlanta and Knoxville.

About Chronicle Collectibles
Dallas, TX based, Chronicle Collectibles is a company of collectors and prop makers with a shared vision of recreating and bringing Hollywood’s most iconic props to life. All products are molded, cast or grown from original puppets, props, studio molds, sculptures and digital files provided by the incredible licensors and talented artists that we have the pleasure of working with.