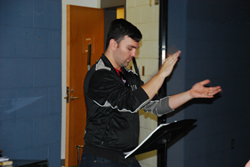 NEA member Alex Price said his "union negotiated with the district to bring back music so our students could have a well-rounded curriculum."

Today’s radical decision by the Supreme Court is a blatant slap in the face for educators, nurses, firefighters, police officers and all public servants who make our communities strong and safe. —Lily Eskelsen García, President, National Education Association

The following statement was issued by leaders and members of NEA, AFSCME, SEIU and AFT following the decision by the U.S. Supreme Court to rule against working people and in favor of billionaire CEOs and corporate interests in Janus v. AFSCME Council 31, holding that requiring fair-share fees in the public sector violates the First Amendment of the Constitution.

As millions of American workers recommit to their unions and launch new organizing drives and as support for labor unions has risen to its highest level in years, it is shameful that the billionaire CEOs and corporate special interests behind this case have succeeded in manipulating the highest court in the land to do their bidding. This case was nothing more than a blatant political attack to further rig our economy and democracy against everyday Americans in favor of the wealthy and powerful.

Public service workers — teachers, social workers, firefighters, 911 operators — are more determined than ever to stick together in their unions. Unions remain the most effective vehicle for the power in numbers working people need to secure their rights and freedoms, and provide a pathway to the middle class. We will remain a strong and vibrant force for working people, and will continue fighting to sustain our families, improve our workplaces and to make our communities stronger regardless of the court’s ruling.

Today’s decision sends our economy in the wrong direction. But it is also a rallying point. We call on elected leaders and candidates to do everything in their power to make it easier to unite in unions and build more power for all working people.

“Today’s radical decision by the Supreme Court is a blatant slap in the face for educators, nurses, firefighters, police officers and all public servants who make our communities strong and safe. We are living in a system that is rigged to benefit special interests and billionaires, all at the expense of working people. Those behind this case know that unions amplify workers’ voices and transform their words into powerful and collective action. Even though the Supreme Court sided with corporate CEOs and billionaires over working Americans, unions will continue to be the best vehicle on the path to the middle class.” —Lily Eskelsen García, President, National Education Association (NEA)

“Fine arts programs were being cut from my school and students were missing out on subjects like arts and music. My union negotiated with the district to bring back music so our students could have a well-rounded curriculum. When some school principals tried to renege on the agreement, as a union, we stepped up. Educators came together through our union and spoke out for what our kids need. Strong unions build strong schools and strong communities. We need unions now more than ever.” —Alex Price, band director and instrumental music teacher, Belmont High School and Wright Brothers Middle School in Dayton, Ohio

“Unions will always be the most effective force and vehicle to propel working people into the middle class. Despite this unprecedented and nefarious political attack — designed to further rig the rules against working people — nothing changes the fact that America needs unions now more than ever. We are more resolved than ever to fight like hell to win for our members and the communities they care so much about. AFSCME members don’t do this work to get rich. They do it because it’s a calling — and for that service, they deserve respect. They deserve the same freedoms as the CEOs and billionaires who continue to rig the rules against everyone else. The American labor movement lives on, and we’re going to be there every day, fighting hard for all working people, our freedoms and for our country.” —Lee Saunders, President, American Federation of State County Municipal Employees (AFSCME)

“No court case, win or lose, could ever change how important my work and service is to me and the community I care about. My union gives me the strength, freedom and the tools I need to help people and to provide for my family. That’s why I’ll always stick with my coworkers, no matter what. We’re going to keep doing what we’ve been doing: organizing and talking to coworkers and community members, building power for working people.” —Stephen Mittons, AFSCME Council 31 member, Child Protection Investigator for the Illinois Department of Children and Family Services

“This decision is yet another example of how billionaires rig the system against working people, but SEIU members won’t let the extremists behind this case divide us. We will stay united, help workers who are fighting to form unions, and call on our elected leaders to do everything in their power to make it easier for working people to join together in unions.” —Mary Kay Henry, President, Service Employees International Union (SEIU)

“My coworkers and I are not going to let this court decision stop us from sticking together in our union. We know that we are stronger together, and that matters when we are working to ensure our community is resilient when faced with disasters like earthquakes or floods. We won’t let any court case, billionaire, or propaganda campaign divide us.” —Sara Campos, public health emergency preparedness specialist, SEIU Local 503 in Salem, Oregon

“Don’t count us out. While today the thirst for power trumped the aspirations and needs of communities and the people who serve them, workers are sticking with the union because unions are still the best vehicle working people have to get ahead. Strong unions create strong communities. We will continue fighting, caring, showing up and voting, to make possible what is impossible for individuals acting alone. And we will continue to make that case — in the halls of statehouses and the court of public opinion, in our workplaces and communities, and at the ballot box in November — through organizing, activism and members recommitting to their union.

“This is a dark day in U.S. jurisprudence. Swung by a Trump-appointed justice with a long history of ruling for the wealthy and corporations over regular people, the Supreme Court overturned a 40-year unanimously decided precedent that has given teachers and firefighters, nurses and cops, a path to a better life for themselves and their communities.

“Forty years ago, the court recognized that collective bargaining for teachers and other public sector workers benefits those workers, their employers and their communities. Union representation, if chosen by a majority, is the glue that holds us together. That wisdom has now been abandoned by the slimmest majority. The dissenting justices saw this case for what it really was — a warping and weaponizing of the First Amendment, absent any evidence or reason, to hurt working people. Not only was Abood well within the mainstream of First Amendment law, it has been affirmed six times and applied to other cases upholding bar fees for lawyers and student activity fees at public colleges.” —Randi Weingarten, President, American Federation of Teachers (AFT)

“Regardless of the Supreme Court ruling, the teachers in our district will stick together to make sure we have a say in the future of our kids. We are a small union in a rural and conservative part of Ohio. There are 84 teachers in our school district, and all but one are full dues-paying members — because we know that teachers’ ability to create a safe learning environment for kids and make teaching a viable profession comes directly from being part of a strong union.” —Holly Kimpon, a high school biology and anatomy teacher, AFT member and president of the Genoa Area Education Association in Ohio

American Federation of State, County & Municipal Employees
AFSCME’s 1.6 million members provide the vital services that make America happen. With members in hundreds of different occupations — from nurses to corrections officers, child care providers to sanitation workers — AFSCME advocates for fairness in the workplace, excellence in public services and prosperity and opportunity for all working families. More information is available online at http://www.afscme.org.

Service Employees International Union
SEIU unites 2 million diverse members in the United States, Canada and Puerto Rico. SEIU members working in the healthcare industry, public sector and property services believe in the power of joining together on the job to win higher wages and benefits and to create better communities while fighting for a more just society and an economy that works for all of us, not just corporations and the wealthy. Learn more at http://www.seiu.org.