Director of National Intelligence; Deputy Director of FBI speaking at The Citadel

Global and national security leaders to participate in 2018 Intelligence and Cybersecurity Conference at The Citadel in Charleston, S.C.. Registration is open to public. 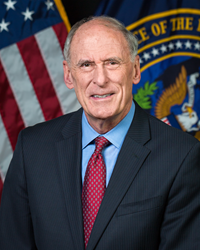 Professionals at all levels of law enforcement, academia, intelligence and cybersecurity operations, as well as students will find the conference to be a valuable investment of their time.

The U.S. Director of National Intelligence, Deputy Director of the Federal Bureau of Investigation, and Chair of the Global Commission on the Stability of Cyberspace, along with other industry influencers, academics and students, will come to Charleston Sept. 25 – 26 for the 2018 Intelligence and Cybersecurity Conference at The Citadel. Daniel Coats, David Bowdich, and Marina Kaljurand will be the featured speakers at the conference that will also include panels with intelligence professionals from government agencies and private security companies, as well as presentations by academic faculty, cadets and students.

“The 2018 Intelligence and Cybersecurity Conference at The Citadel offers frank and informed discussions on current threats, challenges that will emerge, capabilities and defense strategies” said C arl Jensen, Ph.D., professor and head of The Citadel’s Department of Intelligence and Security Studies. “Professionals at all levels of law enforcement, academia, intelligence and cybersecurity operations, as well as students will find the conference to be a valuable investment of their time.”

Jensen served in the FBI for 22 years, is an author, a researcher and the co-director for The Citadel Center for Cyber, Intelligence and Security Studies, a National Security Agency and U.S. Department of Homeland Security designated center of academic excellence.

“We are thrilled to offer an unprecedented opportunity for students to have a face-to-face discussion with the head of U.S. intelligence at our conference.”

The Honorable Daniel Coats
Coats, the Director of National Intelligence (DNI), is the head of the U.S. Intelligence Community. He directs the implementation of the National Intelligence Program and acts as the principal advisor to the President, the National Security Council, and the Homeland Security Council for national security matters. Coats graduated from Wheaton College, served in the U.S. Army from 1966 – 1968, then earned his Juris Doctor from the Indiana University Robert H. McKinney School of Law. Coats served in the U.S. House of Representatives, then in the U.S. Senate for 18 years, and was a member of the Senate Armed Service Committee and Select Committee on Intelligence. Coats was Ambassador to the Federal Republic of Germany for four years and returned to the Senate in 2011 to focus on protecting Americans from terrorist threats. Coats retired from the Senate in 2017 and became the fifth DNI.

Deputy Director David Bowdich
Bowdich was appointed deputy director of the FBI in March 2018 and oversees all FBI domestic and international investigative and intelligence activities. Bowdich began his FBI career in 1995 as a special agent and served as a SWAT Team operator and sniper. He then went to FBI headquarters in Washington, D.C., as part of the Criminal Investigative Division and Director's Office before returning to California to supervise a multiagency gang task force. Bowdich then became the assistant special agent in charge in San Diego over all non-white-collar crime criminal violations, the Imperial County Resident Agency, the SWAT Team, and the Evidence Response Team. From September 2012 to December 2014, Bowdich served as the special agent in charge of the Counterterrorism Division in the Los Angeles Field Office. In that role, he led the Joint Terrorism Task Force as well as all crisis management and response assets. Bowdich became the assistant director in charge of the FBI's Los Angeles Field Office in December 2014 before being appointed the associate deputy director of the FBI in April 2016, a position in which he was responsible for the management of all FBI personnel, budget, administration, and infrastructure.

Marina Kaljurand
Kaljurand is the chair for the Global Commission on the Stability of Cyberspace(GCSC). According to the GCSC, the organization promotes awareness and understanding among the world’s cyberspace communities through issues and policies related to international cybersecurity. Previously, Kaljurand was the Estonian Foreign Minister and Ambassador of Estonia to the U.S., the Russian Federation, the State of Israel, Mexico, and Canada. She served two appointments as the Estonian National Expert at the United Nations Group of Governmental Experts on Developments in the Field of Information and Telecommunications in the Context of International Security. Kaljurand, who is fluent in Estonian, English and Russian, also played an important role as negotiator in the process of Russian troop withdrawal and in negotiations on land and maritime boundaries agreements between Estonia and the Russian Federation, as well as in the accession negotiations of Estonia to the European Union. Kaljurand graduated from Tartu University (M.A. in Law), has a professional diploma from Estonian School of Diplomacy, and an M.A. degree in International Law and Diplomacy from the Fletcher School of Law and Diplomacy, Tufts University.

Examples of panels include:

This is The Citadel’s third Intelligence and Cybersecurity Conference.

Members of the news media wishing to cover the conference are welcome, but should email kkeelor@citadel.edu by Sept. 19 to provide the required information and credentials to attend.

About The Citadel
The Citadel with its iconic campus located in Charleston, South Carolina, offers a classic military college education for young men and women profoundly focused on leadership excellence and academic distinction. The 2,300 members of the South Carolina Corps of Cadets are not required to serve in the military but about one-third of each class earn commissions to become officers in every branch of U.S. military service. Graduates of The Citadel have served the nation, their states and their communities as principled leaders since the college was founded in 1842. The Citadel Graduate College offers 26 graduate degree programs with 42 concentration options, 27 graduate certificate programs, and 8 evening undergraduate programs, through an all-evening schedule with many courses now available online. The Citadel was named Best Public College in the South by U.S. News & World Report for seven consecutive years, and No. 1 Best Public College for Veterans in the South as well as Best Value out of all South Carolina colleges and universities by Forbes.

Maria Kaljurand, Global Commission on the Stability of Cyberspace Chair