Despite their own injuries, two Danville, CA students organized a June 24 Swim-a-Thon to fund college scholarships for impaired student athletes 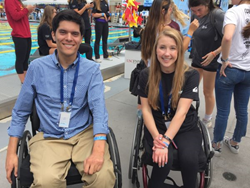 “I’m so impressed by the selfless efforts of Jake and Katie,” says Miller, who is donating to the Swim with Mike event through his recently launched Andrew Miller Foundation (AMF)

Last year, former Polycom, Inc. CEO Andy M. Miller, contributed to a fundraising campaign for the family of Danville, CA, student-athlete Jake Javier, a talented high school football player who was paralyzed from the chest down in a swimming pool accident on the eve of his graduation.

Jake attends college at Cal Poly San Luis Obispo where, among other things, he assists the Cal Poly football players and coaches from the sidelines. Although still paralyzed, he is studying biomedical engineering and hopes to work in the field of regenerative medicine.

Last month, Jake teamed up with another recently injured student, Katie Pasichuke, to organize a June 24 Swim-A-Thon and Bellyflop Contest at the Del Amigo Swim Club in Danville. The event raised more than $20,000 for scholarships to help other physically challenged and impaired student athletes attend college.

Katie, a multi-sport athlete who attended San Ramon Valley High School a year ahead of Jake, suffered spinal damage in a fall from a balcony a year after his 2016 injury. She now attends the University of Southern California (USC) where, in addition to her continuing physical therapy, she is pursuing a degree in international relations and global business.

All proceeds from the recent Danville fundraiser will go to Swim With Mike, a Los Angeles charitable organization that was founded in 1981 to raise funds for Mike Nyeholt, a three time All-American USC swimmer who was paralyzed from the chest down following a motorcycle accident. Swim With Mike has evolved over the past 38 years into an annual fundraiser that supports physically challenged athletes across the country. Thus far, the organization has raised over $20 million in support of more than 200 students’ scholarships.

“I’m so impressed by the selfless efforts of Jake and Katie,” says Miller, who is donating to the Swim with Mike event through his recently launched Andrew Miller Foundation (AMF). “It’s amazing that – despite their own physical challenges and busy college schedules – they found the time and energy to organize such a successful event on behalf of other injured students.”

Miller, a veteran technology-industry CEO who has served as CEO of Polycom and Tandberg, and in other senior positions for companies including Cisco, IPC Systems and Monster Worldwide, launched AMF last year to increase awareness and financial support for under-recognized charitable organizations making a difference in their communities. Besides Miller’s own initial funding, the foundation raises additional support from other donors, with all funds raised going directly to selected charities or scholarships.

Miller has more than two decades of executive experience in industry leading technology and telecom companies. As a senior operating executive, he has excelled in focusing on strategic growth areas, leading global expansion, and driving improved profitability. As a director, he has served on four public boards and collaborated on two successful enterprise communications IPOs, at Gigamon (GIMO) and Broadsoft (BSFT). In addition to guest lecturing at UCLA, USC and Stanford, Andy has spoken at the World Economic Forum in Davos and has given keynote addresses at Microsoft’s Worldwide Mobile Congress and the Aspen Ideas Festival.