With a focus on managing chronic diseases, an extensive reorganization, and collaborating with partners to establish a new medical school, Carilion Clinic President and CEO Nancy Howell Agee has transformed the $2 Billion, Roanoke-based integrated health system into a national leader. 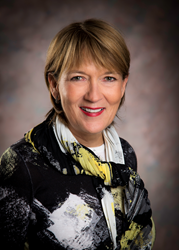 Nancy has been at the forefront of inspiring change in the ongoing quest to make healthcare better and more affordable, and improving the field with significant and lasting contributions.

The National Center for Healthcare Leadership (NCHL), a not-for-profit that works to improve health by enhancing the capacity of healthcare leaders, is pleased to announce that Carilion Clinic President and Chief Executive Officer Nancy Howell Agee will receive its 2018 Gail L. Warden Leadership Excellence Award.

Mrs. Agee, who started her career at Carilion as a nurse in 1973, has been President and CEO since 2011, leading the health system through an extensive reorganization, collaborating with partners to establish a new medical school, and creating highly successful medical homes that manage the care of patients with chronic diseases. In her tenure, she has stressed quality, safety, value over volume, and preventive care, driving the $2 billion health system to national prominence. In addition, in January 2018, she became Chair of the Board of Trustees of the American Hospital Association (AHA).

"Over the many years that I have known Nancy Agee, I have watched her innovative, thoughtful, and strong leadership transform her organization—during the economic recession—into a preeminent integrated care delivery system, while also addressing many critical national healthcare issues,” NCHL President and Board Chair Tim Rice said. “With her lifelong commitment to healthcare, she has excelled at growing a talented team and developing future leaders, and she has been especially effective in addressing gender equity in our field. Nancy has been at the forefront of inspiring change in the ongoing quest to make healthcare better and more affordable, and improving the field with significant and lasting contributions.”

Mrs. Agee joined what was known as Roanoke Memorial Hospital in 1973 as a nurse manager, rising to vice president where her responsibilities included quality, case management, and leadership development. She held that role through 1996 when she was named vice president of medical education at what was then called Carilion Health System. From 2001 through 2011 she was chief operating officer and executive vice president, helping Carilion transition to the clinic mode, before being promoted to her current position as president and CEO.

In addition to being AHA Chair, Mrs. Agee has held many national leadership positions, including serving on the boards of the Coalition to Protect America’s Health Care, The Joint Commission, the Virginia Hospital & Healthcare Association, the Center for Medical Interoperability and Healthcare Realty Trust, Inc. She has also received numerous honors including being named the Business Person of the year by Virginia Business in 2017, one of the Top 25 Women in Healthcare by Modern Healthcare in 2017, one of the 100 Most Influential People in Healthcare by Modern Healthcare in 2016 and 2017, and one of the 50 Most Influential Virginians by Virginia Business in 2016 and 2017.

Mrs. Agee will be honored on Tuesday, November 13, 2018 at the Leadership Award event, which attracts healthcare’s luminaries and notable leaders from prominent health sector, academic, and research organizations. The dinner will be held in conjunction with NCHL’s annual Human Capital Investment Conference. This year's theme of The Arriving Future will highlight the importance of leadership to inform our collective path forward, while mitigating the risks that change, technology, and innovation might present.

As part of the conference, NCHL, in partnership with its sponsor Cielo Healthcare, will recognize the 2018 Best Organizations for Leadership Development (BOLD). Prominent healthcare organizations will showcase their leadership best practices that use evidence-informed approaches to leadership development, such as attracting and selecting leaders, talent management, coaching, diversity leadership, and succession planning.

ABOUT THE GAIL L. WARDEN LEADERSHIP EXCELLENCE AWARD
Established in 2005, NCHL's annual Gail L. Warden Leadership Excellence Award recognizes individuals who have made significant contributions to the health field, including the mentoring of future leaders towards transforming organizational performance to improve health and healthcare. It is named for Gail L. Warden, founding chairman of the NCHL Board, Chairman Emeritus of Henry Ford Health System, and a major proponent of leadership development throughout his career.

ABOUT THE NATIONAL CENTER FOR HEALTHCARE LEADERSHIP
Established in 2001, the not-for-profit National Center for Healthcare Leadership (NCHL) serves as a catalyst to ensure the availability of accountable and transformational leadership for our 21st century healthcare needs. Through its support of interorganizational learning collaboratives, NCHL pursues a vision to improve population health through leadership and organizational excellence. For more information please visit NCHL's website. You can also visit NCHL's LinkedIn page or follow NCHL on Twitter.