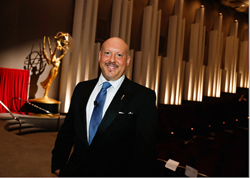 “How do we define what makes a leader cool?” “Why do some celebrities appear to effortlessly embody what is chic and impressive?” Rapper and media personality LL Cool J has produced a show on MSNBC to answer these very questions. The show has authorities in politics, media, history, and art discussing what it means to be “cool” in America.

The three-part docu-series aired on July 1st, 2018 and continues in reruns. Seth Shapiro spoke about the historic change that television has created in American’s views of presidents and their personalities. Shapiro was part of the discussion around three presidents identified as cool: John Kennedy, Ronald Reagan, and Barack Obama.

Shapiro explained how television affected how the American public saw President Kennedy. One of the key factors Mr. Shapiro identified was the ability of President Kennedy’s father to see the importance of media in influencing public perception. Shapiro offered his opinion that the Kennedy family was able to become prominent, in part, by being an early adopter of the power of television.

Seth Shapiro has well established himself as an expert in television’s history and influence on society. He is a two-time Emmy winner, an Adjunct Professor at the USC School of Cinematic Arts, and has been the Governor of the Television Academy, as well as a member of their executive board. His first book “TELEVISION: Innovation, Disruption, and the World’s Most Powerful Medium” was a bestseller on Amazon.

Mr. Shapiro’s television and media expertise has most recently helped guide him and his team of content, blockchain, and digital media experts, as they create AlphaNetworks, a revolution in media that uses blockchain and token technology to create a data driven video platform with incentivized gamification for viewers, influencers, content owners, and independent creators.

AlphaNetworks is a Blockchain-based platform for the future of TV and video networks, powered by A.I.. The architecture combines components of the subscription VOD, online video, and premium cable models to create hyper-efficient recommendations and increased payouts. Built in partnership around a deep set of proprietary APIs and predictive analytics, AlphaNetworks powers an agile, diverse, more transparent media ecosystem. More information about AlphaNetworks, the team, and an explanation of the technology can be found at https://Alphanetworks.io & Telegram at https://T.me/AlphaNetworkstv

Seth's episode segments can be viewed on the AlphaNetworks Facebook page, here.