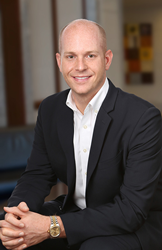 "You must be inside our doors, in the thick of our culture, living and breathing our core values to communicate our story effectively," said Farrah Adams, COO of LBA Hospitality.

LBA Hospitality, a top-ranked hotel developer and operator, is taking its public relations efforts in-house. The Company announced today that Tim Johnson has been promoted to assume the new role of Corporate Director, eCommerce & Communications.

In this new role, Johnson will lead the public relations strategy, direction and administration of all external communications as well as continue to oversee the Company's eCommerce footprint across all digital distribution channels. To support this new direction and accelerate top-line growth across its ever-evolving enterprise of managed hotels, the Company recently increased headcount within its eCommerce department.

Under the Company’s extensive umbrella of management services sits this new, increasingly important, combination: PR and Digital. Johnson’s chief responsibility will be to integrate all aspects of digital and PR, creating a cross-channel strategy that can’t be matched.

“When used in unison, public relations can raise our digital efforts and vice versa,” commented Beau Benton, President of LBA Hospitality. “We’re excited about our decision to merge both into one hybrid role, in-house.”

"You must be inside our doors, in the thick of our culture, living and breathing our core values to communicate our story effectively," said Farrah Adams, COO of LBA Hospitality.

Johnson brings a wealthy combination of experience and education to his newly expanded role. Effective immediately, Johnson will provide leadership over key communications functions including all media and consumer inquiries. To learn more about LBA Hospitality, email Tim Johnson at communications(at)lbaproperties(dot)com.

ABOUT LBA HOSPITALITY
Established in 1973, LBA Hospitality is one of the leading hotel management, development and consulting companies in the US. With an extensive portfolio of hotels located in the Southeast and Southwest, the Company is a recognized leader developing and operating the most respected brands under franchise licenses of Marriott International, Hilton Worldwide and InterContinental Hotel Group. For more than four decades, LBA Hospitality has continued to set a higher standard in hotel development, management and guest satisfaction, resulting in sustained, profitable growth for owners. For more information, visit http://www.lbahospitality.com.