Paris Wade has officially announced his run as a republican candidate for the Nevada State Assembly, District 41. The general election will be held on Nov. 6, 2018. 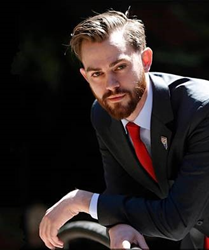 When elected, I promise to bring my passion and entrepreneurial spirit to the Nevada State Assembly. I will fight for everyone in my district and the great state of Nevada.

A closed primary election took place on June 12, 2018 where both candidates ran unopposed. The general election will be held on Nov. 6, 2018.

“When elected, I promise to bring my passion and entrepreneurial spirit to the Nevada state assembly,” Wade said. “I will fight for everyone in my district and the great state of Nevada. I love Nevada and I’ll strive vigorously and resolutely to have it continue to remain free and fair for every person who chooses it as home.”

Wade has successfully run three Nevada-based companies and donated thousands of dollars to charities like Nourish International that help impoverished communities around the world. Wade entered the political arena to fight for every Nevadan and to actively work towards preventing over-regulation, taxation, and unchecked government spending.

Wade previously spoke out about offering veterans a better future saying, “Our men and women in the armed forces have put their lives on the line for us. We must stand with them and their families when they return home.”

Wade graduated with a Bachelor of Science in Advertising from the University of Tennessee and a minor in business. He grew up in a countryside home in Tennessee where he began exploring American history at an early age, developing a passion for both the United States and the art of writing. When he was 20-years old, Paris’ mother passed away from breast cancer.

“When my mother passed away, I was inspired to get into public service because I wanted to make sure no family in America should suffer without help.”

Wade recently proposed to his girlfriend, Ana, and is excited about the future of Nevada.

“I want to put money back in people’s pockets. I want people to start their own businesses and I want my children to be raised in Nevada. Together, we can make sure that our schools get better, our healthcare improves and that our people are safe from gangs and criminals. I also have two adorable kittens that I don’t want to have suffer because we, as a state, couldn’t provide the necessary care.”