According to a New Whitepaper by Metaari, International Investments in Edtech Companies in 2018 Reached a Stunning $16.34 Billion in 2018 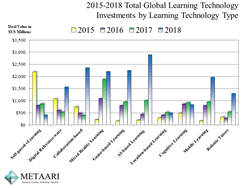 "AI-based Learning is the one area where the US still has a commanding lead over China."

The most striking pattern in 2018 was the investor interest in AI-based Learning startups. Learning products with integrated Artificial Intelligence dominated the investment rounds. A combined total of $2.90 billion went to 197 companies developing AI-based Learning products across the planet in 2018. This was the highest investment total (by a wide margin) out of the ten learning technology product types analyzed in the whitepaper.

There was also a spike in the total number of deals made compared to 2017. In 2018, 1,087 edtech firms across the planet obtained funding, up more than 33.6% from 813 in 2017. The investment patterns were heavily weighted in a small number of companies. The majority of investment was concentrated in the 67 companies that garnered over $50 million in funding. These 67 companies raised a combined total of $9.4 billion. Twelve companies raised over $200 million in 2018 and eleven of them were in China. China's Zuoyebang raised an astonishing $850 million in two rounds in 2018.

Metaari publishes their annual whitepaper in the first week of January every year. The new free whitepaper has 45 pages, 10 tables, and six charts. It is called "The Stunning 2018 Global Learning Technology Investment Patterns: The Rise of the Global Edtech Unicorns".