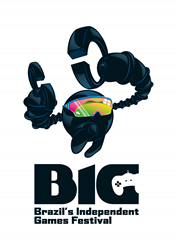 The 2019 Brazil Independent Games (BIG) Festival, Latin America’s largest indie expo for video game professionals, kicks off today with its 7th edition at the Homs Club in Sao Paulo, Brazil. This year, BIG will feature a roster of about 300 international and local esteemed speakers across a week of master classes, keynotes, workshops, game jams, panels and networking opportunities.

"In 8 years, BIG Festival has placed Brazil on the map of international events in this sector. BIG Festival is part of a broader strategy, carried out by the Brazil Games Export Program, a partnership between Apex-Brasil, the Brazilian Trade and Investment Promotion Agency, and Abragames, the Brazilian Game Companies Association", says Eliana Russi - Executive Manager of Brazil Games.

The 7th edition is welcoming 120 international players, from 330 registered companies representing 24 different countries. More than 550 professionals are scheduled to meet, fostering an unparalleled business environment, which facilitates the making of new business deals on a global level.

The 2019 BIG Festival Awards ceremony will take place on the night of June 28, to once again recognize and reward some of the best talent in the industry. During the evening, the audience will celebrate the winners to reach a climax, expected to be filled with passion and vibrant energy equal to none.

This year, the awards are featuring a brand new prize, the “Humble Big New Talent Award”. Created through an unprecedented partnership with Humble Bundle, one of the most influential independent global publishers, Latin American studios who submitted their projects to the BIG Festival 2019 competition will have a chance to win a cash prize of $15,000.

Expanding its influence outside of Latin America and Brazil, through strategic partnerships, BIG 2019 is also hosting the Nordic Game Discovery Contest. The NGDC is a global competition whose mission is to find promising games brimming with potential and bring them together to battle for prizes. Season IV first qualifier will take place in Brazil this year during the festival.

Sticking to the roots of independent gaming, BIG 2019 will also stage a massive game jam, sponsored by Facebook, which will grant several prizes, including Facebook advertising credit and a hardware Oculus VR Kit. The Facebook Game Jam kicks off on Saturday, June 29 at 10am (local time) and the winners will be announced after 30 hours of intensive work with 10 teams competing.

In total, BIG consists of more than 125 lectures, panels, tutorials and roundtable discussions. BIG festival will feature more than 330 exhibiting companies and 75 games showcased. For more details on the BIG festival, please visit the BIG’s official website, or subscribe to regular updates via Facebook, Twitter, Instagram.

About BIG Festival
BIG Festival (Brazil's Independent Games Festival) has been held since 2012 and is considered the most influential and innovative independent gaming festival in Latin America. With the mission to strengthen the Brazilian video game ecosystem, the event produces a yearly international independent video game award competition offering significant cash prizes, a major exhibition showcasing hundreds of games including the awards nominees, a spectacular awards ceremony event, industry related lectures and business rounds. In 2018 BIG hosted more than 20,000 visitors, 3,500 of them having participated in keynotes, and more than 1600 guests attending business meetings. This year BIG will expand its schedule of lectures and workshops by incorporating new topics and areas that are part of game development cycles, such as music, animation, virtual and augmented reality, a career center, among other segments already present at the event.

About Apex-Brasil
The Brazilian Trade and Investment Promotion Agency (Apex-Brasil) works to promote Brazilian products and services abroad, and to attract foreign investment to strategic sectors of the Brazilian economy. Apex-Brasil organizes several initiatives aiming to promote Brazilian exports abroad. The Agency´s efforts comprise trade and prospective missions, business rounds, support for the participation of Brazilian companies in major international trade fairs, arrangement of technical visits of foreign buyers and opinion makers to learn about the Brazilian productive structure, and other select activities designed to strengthen the country’s branding abroad.