The 2019 Roadmap of State Highway Safety Laws ranks all 50 states and the District of Columbia on passage of 16 essential traffic safety laws. Across all states, 406 legislative gaps are contributing to the daily average toll of 100 deaths and 8,500 on our nation's roadways, underscoring the critical need for state lawmakers to urgently act now to adopt all 16 proven-effective laws.On the path to fully autonomous vehicles, lawmakers should urgently enact comprehensive state laws and advance verified vehicle safety technologies.The 2019 Roadmap of State Highway Safety Laws, speakers' statements, handouts and video playback of the news conference can be found at http://www.saferoads.org 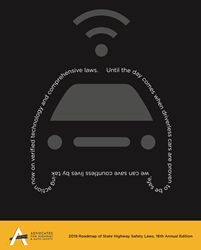 "Until the day comes when driverless cars are proven to be safe, we can save countless lives by taking action now on verified technology and comprehensive traffic safety laws to reduce crashes and save lives," said Advocates for Highway and Auto Safety president Cathy Chase.

Today, Advocates for Highway and Auto Safety (Advocates) released the 16th edition of the annual Roadmap of State Highway Safety Laws. This report rates all 50 states and the District of Columbia (DC) on their progress toward enacting 16 fundamental traffic safety laws. With over 100 people being killed and 8,500 more being injured each day on average, state lawmakers across the Nation should use this report as a guidebook for action as legislative sessions commence throughout the country. If every state enacted just one law this session, substantial progress would be achieved at closing the more than 400 gaps in current laws.

This report comes at a time when significant focus has been on the development of driverless cars. These experimental vehicles are touted as a means to eliminate traffic crashes by removing the factor of human error. However, proven advanced technologies, currently in high end models or offered as part of luxury packages, could be reducing crashes now.

Advocates’ President Cathy Chase said, “The theme of this year’s report is ‘until the day comes when driverless cars are proven to be safe, we can save countless lives by taking action now on verified technology and comprehensive laws.’ Since Advocates’ founding in 1989, we have been promoting vehicle safety technologies backed by evidence to reduce crashes and save lives. While we are optimistic that automated systems, or ‘driverless’ vehicles, may have the potential to reduce, or even eliminate, crashes in the future, that utopic vision is still likely decades away. If we don’t change the status quo until driverless cars are ubiquitous, motor vehicle crashes will kill hundreds of thousands of people, injure millions more and cost our society billions of dollars.” She added, “We know what to do. Enact strong laws and deploy proven technology. This combination will bring about meaningful change. It’s time for state and federal lawmakers to prioritize safety. We stand ready to help them succeed and save lives.”

Janette Fennell, President and Founder of KidsAndCars.org and Consumer Co-chair of Advocates, stated, “Lately there has been a great deal of focus on the flashy driverless cars of the future to remedy the issues plaguing our roadways, such as impaired and distracted driving and excessive speeding. However, the realization of that potential is a long way off. And, when we reach the time when driverless cars are on the roads with traditional cars, tried and true protections like seat belts, motorcycle helmets and child safety seats will remain incredibly important. This is why it is imperative that states take action now on implementing these basic safeguards.”

This year’s report shows that 406 laws are needed for all states to meet Advocates’ optimal recommendations. Additionally, no state has all 16 recommended laws. “Traffic safety data shows that Advocates’ recommended basic and critical traffic safety laws are urgently needed,” said Colonel James J. Mendonca, Chief of the Central Falls Police Department in Rhode Island. Colonel Mendonca, whose home state of Rhode Island has the highest number of Advocates’ recommended laws, also noted, “Recklessness is a frequent factor; be it speed, lack of seat belt and motorcycle helmet use, and impaired or distracted driving. These are some of the repeated, yet entirely preventable, factors leading to motor vehicle crashes on our nation’s highways and byways. One of the most difficult parts of being a law enforcement officer is delivering the news that a loved one has been killed in a motor vehicle crash. That complete devastation is one of the major motivations for my participation in this event today. Passage of comprehensive laws enables officers to work toward curtailing these fatalities and making the roads safer for all.”

Advocates’ report gives every state and DC a rating in five categories (Occupant Protection, Child Passenger Safety, Teen Driving, Impaired Driving, and Distracted Driving) as well as an overall grade of: Green (Good); Yellow (Caution); and Red (Danger). States with a green rating include Rhode Island, Delaware, Oregon, Washington, California, Louisiana, and the District of Columbia. Thirty-three (33) states received a yellow rating indicating that improvement is needed because of gaps in Advocates’ recommended optimal laws. States that earn a red rating lag seriously behind when it comes to adopting Advocates’ recommended laws. South Dakota has enacted the fewest laws, having adopted just two of 16. Other states with a red rating are Wyoming, Arizona, Missouri, Montana, Florida, Ohio, Nebraska, New Hampshire, Vermont and Virginia.

All states should prioritize safety this year by taking up the recommended laws in the Roadmap Report. “Countermeasures are successful at reducing crashes, saving lives and preventing injuries,” said Matt Gannon, Head of Federal Affairs at Farmers Insurance. “The policies recommended in Advocates’ 2019 Roadmap Report have been demonstrated to be effective, and we urge state lawmakers to take action on them right away. The problems being experienced on our roads are clear – too many people continue to be unbuckled as well as drive impaired or distracted. However, the solutions are also clear. Here in Advocates’ report states will find the roadmap to improving safety now.”

“MADD is grateful to work with the Advocates to encourage and advocate before federal and state legislators to stop tragedies on our roadways. We know that alcohol, followed by speed and not wearing seatbelts are the largest killers, year after year,” said Helen Witty, National President of Mothers Against Drunk Driving (MADD). Along with MADD, Advocates supports strong impaired driving laws like ignition interlock devices for all offenders, which are required in 32 states and DC. Witty added, “We are still working on those 18 other states — and MADD will not stop working with legislators and partners like Advocates until all 50 states require these lifesaving devices for all drunk drivers.”

In 2017, crash fatalities reached 37,133. Additionally, over three million people were injured on our roads in 2016, the latest year for which full data is available. This devastating death and injury toll also imposes a serious economic burden on society. Each year on average the comprehensive cost of motor vehicle crashes is over $800 billion – nearly $250 billion of which are direct economic costs, imposing a “crash tax” on every American of $784.

Dr. Elda Ramirez, Director of the Emergency/Trauma Nurse Practitioner Program at the University of Texas, Founder of the American Academy of Emergency Nurse Practitioners, Emergency Nurses Association member and Fellow of the Academy of Emergency Nursing, said, “Sadly, no matter how hard we work, sometimes it’s not enough to save a life or prevent a lifelong injury. We have seen far too many people suffer and spoken with far too many families whose loved ones did not survive a crash. These injuries and losses are devastating for the individual, their family, friends, communities, and the medical care team. It is especially heartbreaking when the loss of life or function is entirely preventable, as is the case with traffic crashes.” She continued, “With more than 37,000 deaths and millions of injuries annually on our roads, elected officials throughout the country must move forward with the preventative countermeasures in Advocates’ Roadmap Report. Failure to do so will result in more traffic crash victims in emergency rooms -- an outcome no emergency nurse wants to experience.”

In 2018, five laws were passed that meet the criteria of the Roadmap Report. Idaho and Iowa adopted ignition interlock requirements for all impaired driving offenders, moving their overall rating up from red to yellow. Illinois, Nebraska and Virginia improved their child passenger safety laws by requiring children to be in rear facing seats at least up to age two. However, the laws below are still urgently needed:

The 2019 Roadmap of State Highway Safety Laws, speaker statements, handouts and video of the news conference can be found at http://www.SafeRoads.org.