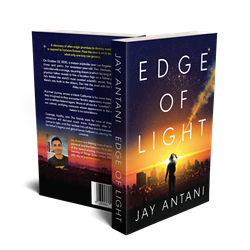 Set against the backdrop of economic collapse, of war, wildfires, and a rapidly spreading mysterious pandemic, "Edge of Light" will strike a chord with anyone alive on Earth in 2020, wishing for a story that turns our current realities and our potential future into the stuff of thrilling fiction.

On November 17, acclaimed indie author Jay Antani releases his highly anticipated second novel, the sci-fi adventure "Edge of Light" across major e-book platforms, including Amazon, Apple, Kobo, and Barnes and Noble as well as on paperback through Amazon.

Following 17-year-old Dev Harrison and his two best friends as they race across a bleak 2030's California landscape to recover the world's most coveted scientific secret before it falls into the nefarious hands of several eager forces. The book is sure to resonate with fans -- teens on up -- of conspiracy thrillers, alien-invasion horror, and even hard sci-fi as the plot also follows the suspenseful discovery of dark matter, wormholes, and the invention of an interdimensional machine.

In 2014, Jay Antani released his debut best-selling novel, "The Leaving of Things" (Lake Union) to high acclaim. Set in India and America, the award-winning, cross-cultural coming-of-age saga explored the bonds and duty of family ties competing against the pull of individual destiny. Antani's sci-fi adventure follow-up, on face, is a radical departure, but, in fact, hews closely to his signature themes of friendship, loyalty, and the call to action.

Set against the backdrop of economic collapse, of war, wildfires, and a rapidly spreading mysterious pandemic, "Edge of Light" will strike a chord with anyone alive on Earth in 2020, wishing for a story that turns our current realities and our potential near-future into the stuff of thrilling fiction.

About the Author:
Jay Antani is a lifelong lover of stories, both the personal and the fantastic. After receiving his MFA from USC, Jay published "The Leaving of Things" (Lake Union, 2014), an award-winning YA about finding one's voice in a world of clashing and competing cultures. His follow-up, the sci-fi adventure "Edge of Light," packs in everything Jay loves about the sci-fi genre while continuing his exploration of the bonds between richly drawn characters in an often-hostile world.

About Edge of Light:
"Starting with a bang, "Edge of Light" is an action-packed science fiction novel. Beginning with the dramatic opening paragraphs, the plot's drama and suspense continue to accelerate until coming to a climactic and heart-stopping conclusion. With the extreme situations and the characters' reactions, I was hooked from the first page. Not only are the protagonist well-developed and relatable, but the plot is also flawlessly executed. Containing alien creatures, unspecified agencies, and quantum physics, it is a remarkable novel, and I loved ever aspect of the storyline. It is an edge-of-the-seat adventure that will enthrall everyone who enjoys books filled with action, drama, and suspense." (Five Stars) -- SUSAN SEWELL, READERS' FAVORITE BOOK REVIEWS