CNN climate hustles the Alberta oil sands with a distorted story on emissions as the US pre-election Tar Sands Campaign heats up. Friends of Science says two new films, “Climate Hustle 2” (released online Sept 24th) and “Return to Eden” (now live on Friends of Science YouTube) show there is no climate crisis. 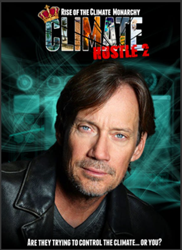 In a recent CNN feature, the news network tried to climate hustle Albertans, says Friends of Science, by claiming there is a climate-COVID ‘last chance’ to reject fossil fuels, blaming the Alberta oil sands as a large emitter. The truth is that “China emits in one month (819 Mt/month) about what Canada emits in one and a half years”, as explained in a Friends of Science report by Robert Lyman entitled “Futile Folly.”&nbsp;Lyman, an Ottawa energy policy consultant and former public servant of 27 years, diplomat for 10 years, says Canada’s climate policies in the global context are “…extraordinarily expensive and dangerous political grandstanding…. Canadians deserve better.”Alberta’s oil sands have faced a decades long international demarketing Tar Sands Campaign, described by some as a handy ‘green’ political lever in US elections. Others say it is a geopolitical campaign to force global cap-and-trade, price on carbon and a platform for pushing renewables, using ENGOS as proxies for green billionaires, as outlined in this report “Protest vs Green Trade War”.

Though many green activists like ex-banker Mark Carney claim fossil fuel assets will be a liability, Robert Lyman disposes of that myth in his latest report “The Stranded Assets Myth” and this Sept. 25, 2020 article in the Financial Post: “Mark Carney’s Bad Investment Advice”.“Climate Hustle” is a term coined by CFACT for their movie series of the same name – meaning that the public are being ‘hustled’ or conned, as in a shell game, with a sense of urgency, big risk, and big money on the table – most of it yours! CFACT’s new movie “Climate Hustle 2 – The Climate Monarchy” premiered Sept. 24, 2020 online.

It is a remarkable coincidence that at New York’s Climate Week, as reported by ABC on Sept. 21, 2020, &nbsp;a real climate monarch, Prince Charles, claimed a climate Marshall Plan would be required to address what he says is an urgent crisis. “Climate Hustle 2” poses the question – “Are they trying to control the climate, or you?

The fast-paced film is hosted by Kevin Sorbo and takes the viewer on a whirlwind tour of various bizarre Climate Monarchy schemes, ranging from wanting the peasants to eat bugs, to schemes that will bioengineer you a smaller carbon footprint…by making people smaller! Climate science, public policy, economics experts and authors like Richard Lindzen, Lord Monckton, Mark Steyn, Don Easterbrook, Ross McKitrick, Judith Curry, and more are peppered throughout the show, highlighting key points and flaws of climate dogma. In other climate documentary news, Friends of Science Society is pleased to host the full trilogy of Marijn Poels’ award-winning films – all viewable online free of charge on Friends of Science YouTube channel – “The Uncertainty Has Settled”, “Paradogma: Why True Liberty Needs Heretics”, and now “Return to Eden”.

Poels goes back to nature with “Return to Eden”. In a cinematically beautiful film, Poels travels the world and documents how livestock are turning the desert green, how small local gardens can feed remote communities, provide livelihood and food security, and how most of the solutions to human-affected climate change, biodiversity, people and planetary protection, are grounded in common sense. No multi-trillion-dollar Green New Deal required. Climate Monarchs, like Prince Charles, investors and citizens will be enlightened by “Climate Hustle 2” and Marijn Poels’ climate trilogy, especially the elegant and beautiful “Return to Eden”. About Friends of Science Society Friends of Science Society is an independent group of earth, atmospheric and solar scientists, engineers, and citizens that is celebrating its 18th year of offering climate science insights. After a thorough review of a broad spectrum of literature on climate change, Friends of Science Society has concluded that the sun is the main driver of climate change, not carbon dioxide (CO2). Friends of Science Society

"Return to Eden" Part 3 of Marijn Poels' award-winning climate trilogyReturn To Eden - It’s all about coming home. When Natural and human interests impinge on each other and over-regulation disturbs our biological balance. important questions arise. Do we belong to nature or does nature belongs to us?