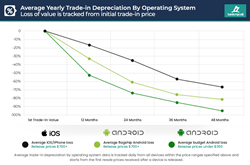 Budget Android Devices Lose an Average Of -52.61% in Year One

Through 2020-2021, cell phone trade-in site BankMyCell tracked 310 device resale values from multiple vendors, hourly. Our report shows which smartphones are most likely to bleed resale value by brand, model, and operating system – essential knowledge for consumers looking to leverage the value of their old device in an upgrade.

Budget Android Devices Lose an Average Of -52.61% in Year One

The iPhone 11 range equated to 12.35% of all the trade-ins going through the site in 2020, Samsung's rival flagship, the Galaxy S20 range, head to head in price retention:

If we were to look at the depreciation from the devices launch day price, brand new and in a box, not the initial trade-in value above, the data is much more shocking:

Google Pixel phones appeared in a lot of report lists we ran, like the highest depreciation by price or percentage. Consumers who owned one of the top 10 most traded-in Google Pixel phones in 2020 lost an average of -40.17% of the device's value in 12 months.

We tracked 310 phone's depreciation across nine popular phone brands to see which lost the most in 2020. According to the data, the three brands who's device lost the highest percentage are as follows:

Who Are BankMyCell?
BankMyCell is the trusted name for cell phone trade-ins in the US - We have extensive experience in the electronics recycling market. In fact, our CEO previously owned CompareMyMobile.com, a gadget trade-in powerhouse in the UK and supplier of data to Sky, cellular networks, Mobile News Magazine, cell phone distributors, and much more. Since 2009 our team has been responsible for directing over $150m worth of gadget trade-ins to online stores globally. We pride ourselves on giving consumers accurate, up-to-date, and independent advice on the price comparison options available.

2020-2021 Depreciation by Popular iPhone Trade-insThe most popular iPhones being traded in this year, and their buyback loss

2020-2021 Depreciation by Popular Samsung Trade-insThe most popular Samsung phones being traded in this year, and their buyback loss