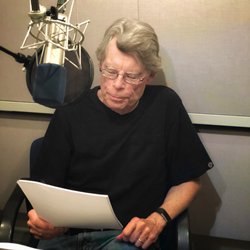 Stephen King to be honored for Lifetime Achievement at the Audie Awards® on March 2, 2020 in New York City

The Audio Publishers Association (APA) announced today they will bestow a special recognition on bestselling author STEPHEN KING for Lifetime Achievement at the 2020 Audie Awards®. The Audie Awards®, known as the most prestigious award in the audiobook industry, will celebrate its 25th anniversary in 2020, capping a period of tremendous growth in popularity and acclaim for audiobooks. The event will take place on March 2, 2020, at Guastavino’s in New York City.

Mr. King, a four-time Audie Award® winner and seventeen-time nominee, is the author of more than sixty books, all of them worldwide bestsellers. A long-time advocate for audiobooks, Mr. King once wrote of his love of the format: “The spoken word is the acid test. They don’t call it storytelling for nothing.” Mr. King has narrated some of his own audiobooks, published audiobook originals, and has used his megaphone to highlight the joys of listening. His recent work includes The Institute, Elevation, The Outsider, Sleeping Beauties (co-written with his son Owen King), and the Bill Hodges trilogy: End of Watch, Finders Keepers, and Mr. Mercedes (an Edgar Award winner for Best Novel and an AT&T Audience Network original television series). His novel 11/22/63 was named a top ten book of 2011 by The New York Times Book Review and won the Los Angeles Times Book Prize for Mystery/Thriller. His epic works The Dark Tower and It are the basis for major motion pictures, with It now the highest grossing horror film of all time. He is the recipient of the 2018 PEN America Literary Service Award, the 2014 National Medal of Arts, and the 2003 National Book Foundation Medal for Distinguished Contribution to American Letters. He lives in Bangor, Maine, with his wife, novelist Tabitha King.

It was also announced that celebrated writers ADAM SILVERA, EMMA STRAUB, and R. ERIC THOMAS will serve as judges for the 2020 Audiobook of the Year.

Adam Silvera is the New York Times bestselling author of They Both Die at the End, More Happy Than Not, and History Is All You Left Me and—together with Becky Albertalli—coauthor of What If It’s Us. He was named a Publishers Weekly Flying Start. Adam was born and raised in the Bronx. He was a bookseller before shifting to children’s publishing and has worked at a literary development company and a creative writing website for teens and as a book reviewer of children’s and young adult novels. He is tall for no reason and lives in Los Angeles.

Emma Straub is the author of the New York Times bestsellers The Vacationers and Modern Lovers, as well as the novel Laura Lamont’s Life in Pictures and the short story collection Other People We Married. Her next novel, All Adults Here, releases in May 2020. Her books have been published in more than twenty languages, and with her husband, she owns and operates Books Are Magic, an independent bookstore in Brooklyn.

R. Eric Thomas (he/him/his) is a senior staff writer at Elle online where he has written the daily pop culture and politics humor column “Eric Reads the News” since 2016. His first book, Here for It, will be published in February 2020. He’s also been published by The New York Times, among many other publications. As a playwright, his work has been seen on stages around the country; he won the Barrymore Award and the Dramatists Guild Lanford Wilson Award and was a finalist for the Steinberg/American Theater Critics Association New Play Award. Off the page, he is the long-running host of The Moth StorySlams in Washington, D.C., and Philadelphia. He lives in Baltimore with his extraordinary husband, the Reverend David Norse Thomas, and an out-of-control collection of succulents, candles, and tote bags.

Formed in 1986, the Audio Publishers Association (APA) is a not-for-profit trade association that advocates the common, collective business interests of audio publishers. The APA consists of audio publishing companies and suppliers, distributors, and retailers of spoken word products and allied fields related to the production, distribution, and sale of audiobooks.

You can learn more about past Audie Award winners and awards by visiting http://www.audiopub.org/winners.