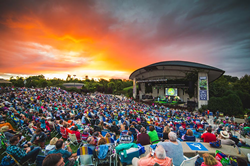 Frederik Meijer Gardens & Sculpture Park is pleased to announce four of the performing artists for the 2020 Fifth Third Bank Summer Concerts at Meijer Gardens concert series. Featuring an eclectic mix of alternative, indie, blues and classic rock, the lineup will include Gregory Alan Isakov on June 7, Squeeze on July 9, Michael Franti & Spearhead on August 16 and The Australian Pink Floyd Show on August 30.

The complete lineup will be announced in mid-April.

Gregory Alan Isakov
June 7, 2020
Born in Johannesburg, South Africa, and now calling Colorado home, horticulturist-turned-musician Gregory Alan Isakov has cast an impressive presence on the indie-rock and folk worlds. Isakov has toured internationally with his band and has performed with several symphony orchestras across the United States. He also manages a small farm in Boulder County, which provides produce to over a dozen local restaurants.

Squeeze
July 9, 2020
Squeeze first formed in 1973, shortly after Chris Difford and Glenn Tilbrook had begun their songwriting partnership, brought together by an ad in a sweetshop window. By 1977 they had made their recording debut and enjoyed a string of hits which lasted until 1982, the maturity of their songs outliving their initial burst of chart activity on the back of New Wave. Over the years there have been solo careers and occasional separations, but the Ivor Novello Award-winning songwriting duo Chris and Glenn reunited in 2007 to relaunch Squeeze and have been touring, writing and recording together since.

Michael Franti & Spearhead
August 16, 2020
Michael Franti is a musician, humanitarian, filmmaker, and activist who is recognized as a pioneering force in the music industry. He believes that there is a great battle taking place in the world today between cynicism and optimism, so he made his most recent album, Stay Human Vol. II, to remind himself - and anyone who’s listening - that there is still good in the world and that is worth fighting for.

The Australian Pink Floyd Show
August 30, 2020
Performing the music of Pink Floyd with note for note perfection, this critically acclaimed show has been astonishing audiences worldwide for more than three decades. Always striving to reproduce the complete Pink Floyd experience and bring the music to new audiences, the show continues to include a stunning light and laser show, video animations, state of the art, high resolution LED screen technology and other special effects. In addition, and in true Pink Floyd fashion, there are several huge inflatables including a giant pig and their own unique Pink Kangaroo.

Members of Meijer Gardens will have the first opportunity to purchase discounted tickets during an exclusive members-only presale, April 25 through May 8. During the pre-sale, members receive a $5 discount per ticket. To become a member or renew a membership before April 25, visit MeijerGardens.org/Membership.

Tickets will go on sale to the general public on May 9. More information on prices and purchasing options will be available following the release of the full lineup in mid-April.

The 2020 Fifth Third Bank Summer Concerts at Meijer Gardens are made possible in part by the generous support of Fifth Third Bank, Harvey Lexus of Grand Rapids and Spectrum Health. Media sponsors are FOX17 and Star 105.7. Additional support is provided by Life EMS.

About the Frederik Meijer Gardens Amphitheater

The 1,900-seat amphitheater is general admission. Concertgoers are welcome to bring a blanket or low-rise chair to sit on. Low-rise chairs are defined as 12” maximum from ground to front of seat bottom and 32” maximum to top of chair back in highest position. Coolers must be 48 quarts or under. These rules are strictly enforced. No other chairs will be permitted in the venue. A limited number of standard-height chairs will be available to rent for $10 (located in designated area-may not be removed) on a first-come, first-served basis. All concerts take place rain or shine (weather delays possible). A wide selection of delicious, high-quality sandwiches, snacks, water, soft drinks and alcoholic beverages are available at the new concessions building. All alcoholic beverages purchased must be consumed inside the amphitheater gates. Concertgoers are also welcomed to bring their own food, sealed bottled water and non-alcoholic beverages in their original sealed containers. No glass containers of any kind are allowed inside the amphitheater. A new concessions building and expanded plaza area opened prior to the 2019 concert season, resulting in quicker food and beverage service and increased capacity, as well as adding convenient restrooms outside of the entry gates for guests waiting in line to enter the venue.