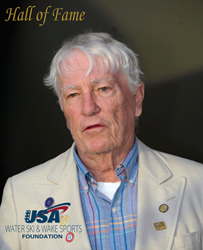 “His passion and technical expertise played such a key role in the advancement of sport for more than five decades. Ed deserves to be immortalized alongside the sport’s greatest in the Hall of Fame.” Tracy Mattes, Executive Director of the USA-WWF.

Brazil, who passed away last April, will be recognized for his many contributions to the sport as part of the Hall of Fame Class of 2020 which also includes inductees – Shaun Murray, Mandy Nightingale and Joe Ray – and Award of Distinction honorees – April Coble-Eller, Gene Davis (posthumously), Nikki Lee, Don Mixon Jr., and Eddie Roberts. The 38th annual Hall of Fame induction ceremony will take place on Saturday, May 2 at Walt Disney’s newly-designed Coronado Springs Resort in Orlando, Fla.

“We are proud to honor the life and legacy of Ed Brazil,” says Tracy Mattes, Executive Director of the USA-WWF. “His passion and technical expertise played such a key role in the advancement of sport for more than five decades. Ed deserves to be immortalized alongside the sport’s greatest in the Hall of Fame.”

Brazil served the sport for more than 50 years and was internationally known and sought after for his technical expertise. It is estimated that he supervised installing or adjusting more than 500 slalom and jump courses during his career. Among his several innovations, he is believed to be the first person to write a computer program for a 3-point slalom course survey; developed a radar-computer interface to figure distance to 36 mph and deviation in the slalom course; came up with the 55-meter pre-gate buoys and did the centerline deviation estimates using his survey instrument; worked on jump course design, including the 60-foot spacing buoy and 500-foot cutout buoy; and came up with the rule to specify the jump ramp by slope or height/length and made the first graph for it.

He was the Chief Technical Controller at the Moomba Masters from 1982-1991 and the was the Chief Technical Controller of the 2003 Pan American Games in Santo Domingo, Dominican Republic. He served on the USA Water Ski & Wake Sports Foundation’s Hall of Fame Selection Committee for 22 years, and was chairman of the committee for 12 years. He was the 1995 recipient of USA Water Ski & Wake Sports’ Award of Merit, the organization’s highest honor for volunteerism.