2020 Rolls-Royce Ghost and Dawn are available in St. Louis, Missouri 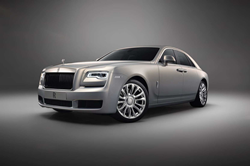 The 2020 Rolls-Royce Ghost and Dawn are at St. Louis Motorcars.

The 2020 model year cars have been rolling out to car dealerships and luxurious cars are no exception to the traditional early release of vehicles. The 2020 Rolls-Royce Ghost and Dawn have made their way to the St. Louis Motorcars lot and in turn both models have become specimens of research for the dealership as it looks to determine what features are new and improved on the models.

Rolls-Royce has been a leader in luxury since it began producing cars in 1904. It added the Ghost model to the lineup in 2010, and has consistently improved the car’s technology, drivetrain and luxurious features since. Research on the Ghost by St. Louis Motorcars found that innovative improvements have been made to entertainment technology, while continuing to sport the features that consumers have praised. The Rolls-Royce Dawn made its debut in 2015 as a luxurious convertible. The research that St. Louis Motorcars conducted on the 2020 Rolls-Royce Dawn found premium content throughout the new model, like safety and entertainment technology to compliment the luxurious interior and exterior.

St. Louis Motorcars carries a wide variety of luxurious cars from a host of different brands and regularly researches the different vehicles it has in stock to help keep shoppers up to date on the innovative technology. Its website displays the current inventory of new and used luxury vehicles and provides a user-friendly method to get in touch with salespeople at St. Louis Motorcars, which is located at One Arnage Blvd. in St. Louis. To get ahold of the sales team, call 636-489-3788 or visit the website at https://www.stl.cars/.