2020: The Year That Changed the World? The Story of an Extraordinary Ornellaia Vintage 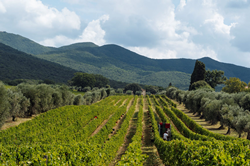 “I can certainly say that 2020 will be a successful vintage for all Ornellaia wines.” - Axel Heinz, Ornellaia Estate Director

Ornellaia, one of the world’s most iconic wine estates, is pleased to announce that a very successful 2020 harvest has concluded, 2020 will remain in the history books for many reasons, first and foremost for all the emergencies caused by Covid-19, which put the whole world on standby for several weeks. Also, from a winemaking point of view, there will be plenty to remember: a dynamic year, full of climate-related twists that maintained an incredible level of suspense until the final days of the harvest. In a few years’ time, 2020 will undoubtedly be remembered as another fine vintage for Bolgheri wines.

Axel Heinz, Estate Director, reports on the vintage in his own words:

FIRST, QUIET, THEN THE COVID “STORM”

Nothing in the winter foretold a vintage so different than usual, except for the repeated mild and rainy climate, with temperatures rarely close to 0°C (32°F). Nevertheless, at the beginning of March, we just managed to finish the winter vineyard work and to bottle Le Volte dell’Ornellaia before the national lockdown was enforced. Fortunately, the buds took their time and broke in the last week of the month, giving the Ornellaia team time to prepare and organize our work in utmost safety.

A MAGNIFICENT SPRING, TIME OF SERENITY

In April, Mother Nature seemed to want to compensate for the difficulties of the lockdown, gifting the vineyards with textbook conditions until the end of May, with hot, mostly dry days. The vines grew regularly, allowing the leaves to be pruned without too much haste. The flowering and fruit set occurred in perfect conditions during the last week of May. June, on the other hand, proved very wet, accelerating the growth of the vines and upping the pressure for plant treatments. The bunches grew substantially at this time and considerable vineyard management was required to keep the foliage under control.

JULY AND AUGUST: THE LEGEND OF THE BOLGHERI SUMMER IS A FACT

July was hot and dry, essential for initiating the veraison, which developed slowly and punctually towards the end of the month. In August, the temperatures increased further, totaling 47 days above 30°C (86°F) for the entire season, with frequent highs of 36-37°C (96.8-98.6°F), making this summer comparable with 2015.

As we could have expected, the first samples of Sauvignon Blanc at the beginning of August already showed a high sugar concentration, which gave rise to predictions of an early harvest. Fortunately, the high daytime temperatures also dipped under 20°C (68°F) at night, allowing the grapes to develop their aromatic potential and maintain good acidity.

Meanwhile, the red grapes continued to ripen slowly, creating an interesting phenolic potential. At the end of August, rain arrived in time to alleviate the excessive water stress and lower the temperatures. During the Merlot harvest, the temperatures dipped to 14-15°C (57.2-59°F) at night, perfect for gathering these grapes at the height of their perfume and energy.

HARVEST: ONLY THE RAIN CAN STOP US

The first bunches of Sauvignon Blanc were harvested on August 13, finishing with the final berries on August 25. The Viognier harvest saw similar times, from August 14-28, showing moderate sugar levels and excellent acidity. For the reds, the harvest commenced on September 3 with the youngest Merlot vines.

In mid-September, a sudden change occurred: a heatwave shortly before the Merlot and Vermentino harvest had been completed. The sugar levels increased and the berries started to become concentrated, accelerating the ripening. In many vineyards, the harvest had to be carried out in two stages: separating the healthy fruit from the grapes burnt by the sun. The Cabernet was harvested immediately after the Merlot, a rare event for Ornellaia, as too was the simultaneous harvesting of Cabernet Franc, Cabernet Sauvignon and Petit Verdot.

A second wave of rain, this time longer, granted a moment of rest for the team during the harvest, which resumed at the end of September, ending earlier than usual, on October 3. The late harvest of the Petit Manseng noble grapes, used to make the estate’s dessert wine, took place a week later, concluding on October 9.

FIRST IMPRESSIONS OF THE WINES: ALL'S WELL THAT ENDS WELL

“I can certainly say that 2020 will be a successful vintage for all Ornellaia wines,” Axel Heinz concludes in his vintage report.

Given the particularly hot summer, the white grapes were harvested early to preserve their aromas and freshness. The Sauvignon Blanc is very balanced, with moderate alcohol, fresh and juicy acidity, and magnificent expressions of ripe tropical fruit. The Vermentino and Viognier are rich and floral, also showing good energy, while the Petit Manseng achieved concentration levels rarely seen before.

The reds are very promising, with a rich and structured style. The Merlot has a smooth texture and great intensity of fully ripened red fruit, without being heavy. The Cabernet Sauvignon, in some cases, is still fermenting, but early samples reveal wines with a regal poise, darkly hued, with classic notes of plants and blackcurrants, and dense and solid tannins.

It’s no longer a secret that Bolgheri is one of the best places to grow Cabernet Franc, but the level reached with the 2020 vintage remains astounding. Rich and dense, with refined tannins, it literally explodes into notes of blackcurrants, violets and delicate plant aromas.

About Ornellaia - http://www.ornellaia.com
The name Ornellaia is synonymous with fine winemaking and an authentic expression of the beauty of Tuscany. The estate is situated along the Tuscan coastline, a short distance from the medieval town of Bolgheri and the iconic cypress-lined approach. Ornellaia Bolgheri DOC Superiore and Ornellaia Bianco are the estate’s top wines, ensued by the second vin Le Serre Nuove dell’Ornellaia, Le Volte dell’Ornellaia and the white Poggio alle Gazze dell’Ornellaia. In little over thirty years (the first vintage of Ornellaia was in 1985), the team’s dedication accompanied by optimal soil and microclimate have resulted in critical acclaim and public success within Italy and internationally.