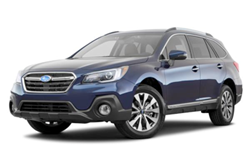 "Congratulations to everyone at Subaru of America and to every New Englander who drives an Outback!”

As the first snow storm of the season bore down on New England, leading automotive writers and video producers from the New England Motor Press Association and WheelsTV gathered via Zoom to select the recipient of the eleventh annual WheelsTV POV of the Year Award.

The WheelsTV POV of the Year, or POVY, is an international auto industry award presented annually to a pre-owned motor vehicle that has proven itself in day-to-day use for at least two years by providing dependable, trouble-free service and achieving exceptional consumer satisfaction.

The award, now in its eleventh year, is presented by WheelsTV, a leading producer of video test drive reports for new and pre-owned vehicles, in cooperation with the New England Motor Press Association. Nine diverse classes of vehicles are judged: Electrics, Hybrids, SUVs, Crossovers, Sporty Cars, Light Trucks, Small Cars, Family Cars and Luxury Cars. The POVY is selected by majority vote from the winners of each class.

After much spirited discussion, and with a nod towards the current snowy conditions in New England, the nine judges selected a vehicle that has proven itself in numerous northeast winters.

The Subaru Outback was a standout in the Crossovers class and went on to easily take the crown in overall judging. The fifth-generation Subaru Outback is now classified as a 'crossover', with the body and wheelbase set larger than previous models, a ground clearance of 8.7 inches that helps boost its utility in snow or mud and an optional 256 horsepower, 3.6 liter engine. In addition to being a great go-anywhere vehicle ideal for snowy New England winters or summer camping, the Outback is a Top Safety Pick of the Insurance Institute for Highway Safety and received five stars from National Highway Transportation Safety Administration.

Members of the distinguished judging panel included these NEMPA members:

When announcing the recipient of the POV of the Year, WheelsTV CEO Jim Barisano stated, “It’s no secret that you have to be tough to endure New England winters. I think that’s why the folks at NEMPA and WheelsTV chose the Subaru Outback. Like anyone who won’t back down from the toughest challenges, the Subaru Outback has proven itself to be reliable, hard working and ready for whatever Mother Nature throws at us. Congratulations to everyone at Subaru of America and to every New Englander who drives an Outback!”