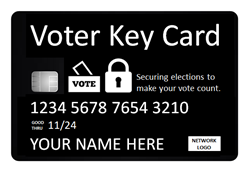 The Voter Key Card works as a key and Voter ID card to unlock a citizen’s ballot to cast or record votes. It leverages bankcard and several other security measures to prevent election fraud. It works to ensure that only living citizens vote one time in any election.

Mr. Smith is not new to inventing solutions to prevent fraud in consumer financial transactions. In the past 20 years, he has invented solutions to prevent Identity Theft and bankcard payment fraud. In 2015 he introduced Card1, a Universal Card and Wallet App. In 2010, his company MobilePayUSA won TechCrunch Disrupt Startup Alley in San Francisco. In 2014 a US patent was granted for this invention that required no new hardware or software at point of sale to enable mobile payments without an NFC chip in the phone or in the merchant payment terminal.

“America has been awakened to the reality that our elections may not be very secure. This is or should be extremely concerning to all Americans. If our voting process is indeed compromised and vulnerable to fraud in determining the outcome of elections, America no longer has a Democracy, but rather has an election system where the votes of citizens may have little to no impact in determining outcome of elections,” states Mr. Smith.

Mr. Smith continues “Credible IT experts gave testimony on news reports that electronic voting machines were very vulnerable to fraud occurring. One judge in Michigan even ruled as such. Mail-In ballots and signature matching also seem to leave door open for fraud to occur as they are manually processed and only viewed by election officials and workers when tallied. The vote tallying process appeared to have little true chain of custody or transparency. This is especially true in comparing to payment or Blockchain transactions. I asked myself, does not our voting process need to be as secure as payment processing or online banking? It made me think how secure in-person payments and even now online payments are and how locked down payment terminals are and bankcards with chips are. Not long after the Voter Key Card solution came to mind. I realized there was a way to leverage the security of payments, multi-factor authentication of the citizen’s identity and other security measures to secure our elections.”

Visit VoterKeyCard.com or read below to learn how the Voter Key Card system works to prevent fraud.

The Voter Key Card works as a key and Voter ID card to unlock a citizen’s ballot to cast or record votes. It leverages bankcard and several other security measures to prevent election fraud. It works to ensure that only living citizens vote one time in any election.

Before issuing a card to citizens, the citizen’s identity would be verified in several ways. This would be done in coordination with state Voter Registration systems and websites. In this verification of identity process, citizens make a purchase using a personal bankcard at a website designated to verify identity utilizing address verification technology that matches the shoppers address and phone number on file with the bank that issued the bankcard. I see this purchase could cost $0 dollars with applying a coupon code issued by email or logging into the platform of the system. Also, this address will need to match the address on file with the state in which the citizen resides, the Voter Registration database and ideally the Internal Revenue database as well.

And remember, banks require verifying government issued ID and Social Security number before ever issuing a bankcard or opening a bank account. This ID verification process of making a purchase online using their own personal bankcard, is a simple, quick and inexpensive method of extra verification of citizens to ensure their identity is valid.

According to the FDIC as of June 2020, only 14.1 million Americans do not have a bank account. If a citizen does not have a bankcard, they would mail in a copy of a utility bill or utilize a phone authentication service to digitally verify identity and their address as well. Once a citizen's identity is fully verified, a Voter Key Card would be mailed to the citizen’s residence or possibly pick it up locally.

Activating a Voter Key Card would work identically as when receiving a new bank credit card in the mail by calling a card activation number, possibly answering some key questions related to their credit history online and having to call from the phone listed by the citizen in the Voter Registration database.

Once a citizen has completed their ballot in person the citizen will receive a paper copy of their cast ballot and should review it ensure their votes cast were as intended and not altered. Then citizens will have this paper ballot scanned and saved as a PDF file. This file will be uploaded to Voter Key Card platform to be formally submitted as a valid ballot. Citizen’s may also use a Voter Key Card app to take pictures of their paper ballot. This app would convert the images into a PDF file and upload it to the Voter Key Card platform. The citizen will receive a text and/or email confirmation that their ballot was successfully uploaded and will be asked to confirm the PDF ballot uploaded is exact copy of their paper ballot by logging in online to the Voter Key Card platform via website or mobile app.

The final step, after the citizen’s ballot is processed, will be a message sent by email, text or mail informing citizen to review the Summary of their Votes online at the Voter Key Card website (or state’s Voter Registration site using Voter Key Card System) or mobile app. Once logged in and having reviewed the Voting Summary and comparing it to their PDF and/or paper copy of their ballot, the citizen shall confirm their votes were cast as submitted on paper ballot or contest it. If the citizen fails to contest or confirm their ballot was accurately processed as cast within a certain time frame, then the Voting Summary would become final.

If contested, a publicly aired livestream adjudication of their ballot shall be conducted. The citizen’s name, any personal information and their Voter Key Card number and Voting Code shall be blacked out. The ruling made here may be contested a 2nd time and adjudicated in Final Ruling by citizens viewing the ballot and casting votes to confirm or contest the Voting Summary. If original Voting Summary is overruled, a new Voting Summary shall be quickly generated and displayed.

The last few months has made Americans consider the very real possibility that mass election fraud and interference in our elections occurred, even possibly by foreign governments via cyber attacks into electronic voting machines.

Mr. Smith asks “How are elections just if they are not secure? Should we not have a vote tally system that is transparent and independent of the voting system? Up to millions of Americans witnessed testimony by credible IT experts that shared how electronic voting machines may be very insecure and very vulnerable to attacks via the internet and even possibly internally by election office administrators or poll workers. Does it not make sense to leverage the security of card payments and use multi-factor authentication to verify identity to allow citizens to vote once?”

Mr. Smith continues “I estimate the Voter Key Card system and platform can be built to scale within 4-6 months. This is with full automation and a platform capable of being seamlessly and securely integrated with state Voter Registration platforms via an API. Of course, this assumes millions of dollars of funding are supplied to swiftly design and build a platform capable of scale as used by 100's of millions of users. In total with testing and API integrations to state Voter Registration platforms and other databases used to verify identity of citizens, it might take another 2-4 months to be ready to deploy in an election. It’s very possible this system could be ready for 2022 primary and Fall elections.

In conclusion Mr. Smith states “It is crucial that our elections are secured. Voting is an absolutely integral part of democracy. Election fraud can silence the voice of citizens voting. Without secure elections our Democracy is at serious risk. All Americans need to know their vote counts. This takes the securing of our election system.”