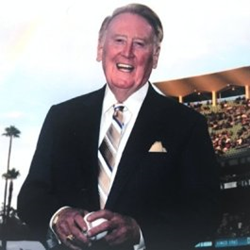 Vin Scully: People love it when they hear me say “It’s time for Dodger baseball”, but I’m asking you to join me in saying that it’s time to end veteran homelessness.

At age 94, Rose Burgess had already lost two military veteran husbands, and was legally blind. Her daughter had just died unexpectedly, and she would soon have no place to live. Police Deputy Chris Dyer was on duty when Rose walked in with nowhere else to go. He knew homelessness was dangerous enough for the young, but it would be a death sentence within weeks for Rose. He also knew just where to turn for help, and immediately sent an e-mail to GCVF - Gold Coast Veterans Foundation… “All Hands On Deck!”

The charity in Camarillo, known for rescuing the most damaged homeless veterans, jumped into action. But they quickly found that virtually all public or private agencies providing housing assistance were prohibited from helping Rose. According to government rules, she was plenty rich enough to fend for herself.

The annual income needed to afford a 1 Bedroom apartment in Oxnard is over $60,000, and Rose’s income was $3300 a month. Although twenty grand short of the real-world need, it’s above the government’s ‘low-income” threshold. Rose had also leased a Subaru for her daughter to use for errands. She had several storage units, and storage for a vintage travel trailer that may have co-starred in a movie with Lucy and Desi. These expenses put her even further away from being able to pay rent.

“We’ve helped thousands of veterans and family members, and rescued 87 from homelessness,” says GCVF’s Director Bob Harris; “but this is the first time we had to rescue a 94 year old blind widow because 12 social service agencies refused to help her… we never saw that one coming.” He adds; “Of course the system doesn’t want to cause harm to people like Rose, but that income threshold was gonna put her out on the street regardless.”

St. Vincent de Paul of Ventura, and individual police officer donations covered an emergency motel room, keeping Rose safe until GCVF could find a long-term solution. They began the enormous task of condensing her storage, finding a buyer for the trailer, finding an affordable ‘senior living’ apartment, and getting her moved in before the motel funding ran out. Case manager Donna Lockwood took Rose to Kirby Subaru in Ventura, who very graciously took the car back without any of the typical ‘early termination’ penalties or fees.

Between the dealership’s goodwill gesture and slashing her monthly expenses, Rose was finally able to have a home. Rescue team leader Rafael Stoneman personally covered several urgent expenses, and United Way of Ventura provided funds for move-in costs. GCVF was then able move her in to a senior living apartment with meals. After getting everything into one storage locker, they even helped sell the trailer (to the son of another veteran).

“We catch the veterans that fall through the cracks” is GCVF’s slogan; this time they caught an elderly widow before she was homeless. “We make these miracles happen every day, but we can’t do it alone,” says Harris; “United Way, St. Vincent de Paul, Chris Dyer and his fellow officers, and the great people at Kirby Subaru all pulled together to rescue Rose. We need the community’s support today, to make tomorrow’s miracle happen.”

On November 9th at 10AM, the Ventura County Board of Supervisors will pause their official board meeting to recognize the organizations who worked together on this life-saving rescue. The rescue team, 94 year old Rose Burgess, and the team’s community supporters will be teleconferenced in to the Board’s meeting from the VCCF Nonprofit Center (4001 Mission Oaks Bl., Camarillo 93012). Highlighting the teleconference will be a personal message from Dodgers baseball legend (and Navy veteran) Vin Scully, who volunteers as “the Voice of Veterans’ Village”, Gold Coast Veterans Foundation’s upcoming housing and healing program for homeless veterans.

Press ReleaseVin Scully is the Voice of Veterans Village

Veterans' Village DesignHealing and Housing in Tandem for any Veteran