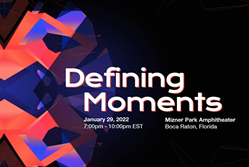 “The venue at Mizner Park is spectacular,” said Erik Mintz, TEDxBocaRaton organizer. “TEDxBocaRaton will be outdoor-friendly under the covered amphitheatre tent and our speakers will bring a variety of ideas and experiences that are sure to impress anyone.”

TEDxBocaRaton today announced the official list of 13 speakers to take center stage at the Mizner Park Amphitheatreon Saturday, January 29, 2022. The highly anticipated, destination event of the year in Boca Raton brings an impressive line-up of speakers who will address this year’s theme of Defining Moments. This year’s thought-leaders make up a new era of change-makers in fields such as science, technology, space travel, solar – and extend our limits way beyond the boundaries of present day thinking.

TEDxBocaRaton is waking up after a pandemic slumber to an impressive and accomplished group of innovators who are literally transforming the world.

“The venue at Mizner Park is spectacular,” said Erik Mintz, TEDxBocaRaton organizer. “TEDxBocaRaton will be outdoor-friendly under the covered amphitheatre tent and our speakers will bring a variety of ideas and experiences that are sure to impress anyone.”

Tickets are now available at https://tedxbocaraton.com/

Erik Mintz, TEDxBocaRaton Organizer is taking his knowledge, network, and passion to spearhead a high-caliber series of speakers sure to make TEDxBocaRaton an acclaimed experience once again. The independently produced event, operated under a license from TED, presents a program of discussions, demonstrations, and performances by leading thinkers, innovators, artists, philosophers and entertainers from diverse fields such as technology, the arts, ecology, education and more.

This year’s speakers include:

James Altucher is an entrepreneur, writer of 25 books including the best-selling "Choose Yourself" which USA Today listed as one of the "ten best business books of all time". He's the host of the "James Altucher Show" podcast, which has had over 70,000,000 downloads.

Cristie Besu, is a Registered Nurse, Sports Nutritionist, former figure competitor, and founder of Eat Me Guilt Free, a company founded on healthy food options, focused on the future of food. Cristie is a fierce advocate for women and freedom of human expression.

Dr. Kenny Broad is an Environmental Anthropologist and Professor at the University of Miami. He has participated in filmmaking expeditions on every continent to gather information on little known environmental and cultural subjects. Kenny is celebrated for demystifying complicated subjects, to share the beauty of subterranean realms, and to find the humor in the everyday.

Dr. Leslie Dewan has a Ph.D. in Nuclear Engineering from MIT and is CEO of RadiantNano that builds equipment to detect radioactive material and safeguard nuclear facilities. She received an MIT Presidential Fellowship, was named one of TIME Magazine’s “30 People Under 30 Changing the World,” a Forbes “30 Under 30” and National Geographic Explorer.

Jane Epstein is a sibling sexual abuse survivor and advocate. She was in and out of therapy and despite marrying and being blessed with two children, became depressed and suicidal. She now provides guidance and tools for prevention and victim recovery.

Lia Garvin is an Operations Leader in tech for some of the world’s most influential companies including Microsoft, Apple and Google. She has built robust diversity and inclusion programs, launched the world’s first holographic computer, and created initiatives for organizational effectiveness.

Rachel Lindbergh is a Space Policy Analyst for the Science &amp; Technology Policy Institute (STPI), a research and development center created by Congress to support the White House Office of Science and Technology Policy.

Chaunte Lowe is a world-renowned high jumper who competed in four Olympic Games (an American record). She is also a breast cancer survivor who bowed out of the national world championships to undergo a double mastectomy. She is now an inspirational speaker on early detection and breast cancer awareness.

Dr. Mireya Mayor is known as the "Female Indiana Jones”. She is an Anthropologist, author, National Geographic Explorer, National Science Foundation Fellow, and Fulbright Scholar. She has spent most of her career reporting on wildlife and habitat loss while advocating for solutions to the alarming trends that are shrinking our wild spaces and contributing to the decline in wildlife health and abundance.

Paula do Vale Pereira is a Ph.D. Candidate in the Space Telecommunications, Astronomy and Radiation Laboratory at MIT. She works on developing new capabilities for space-based exploration systems.

Bryan Smith is an award-winning filmmaker from British Columbia. Bryan has built on his adventure film roots and developed a strong reputation in both TV documentary and commercial cinematography. With a knack for storytelling, an ability to assemble great teams, and strong work ethic, his client list includes National Geographic, Discovery, Disney, Red Bull, Patagonia, Arcteryx, and more.

Jayson Waller is a leader in the field of Solar Energy. He founded the Solar Power Company, POWERHOME that employs over 2,200 people, and is on track to break a billion dollars. Waller is a guest judge on Bloomberg’s TV business pitch show, “2 Minute Drill” and stars on “Office Hours” also on Bloomberg TV.

Kathryn Walter is the TEDxBocaRaton on-stage host. She is an academic, activist and received the “Collegiate Servant Leader of the Year Award” by the World Leaders Group. She travelled the globe as a Project Manager and Event Coordinator assisting in humanitarian efforts.

The link to the speaker’s full bios can be found at: https://tedxbocaraton.com/speakers-2022/

About TED
TED is a nonprofit organization devoted to Ideas Worth Spreading, often in the form of short talks delivered by leading thinkers and doers. Many of these talks are given at TED conferences, intimate TED Salons and thousands of independently organized TEDx events around the world. Videos of these talks are made available, free, on TED.com and other platforms. Audio versions of TED Talks are published to TED Talks Daily, available on all podcast platforms.

TED's open and free initiatives for spreading ideas include TED.com, where new TED Talk videos are posted daily; TEDx, which licenses thousands of individuals and groups to host local, self-organized TED-style events around the world; the TED Fellows program, which selects innovators from around the globe to amplify the impact of their remarkable projects and activities; The Audacious Project, which surfaces and funds critical ideas that have the potential to impact millions of lives; TED Summit; TED Translators, which crowdsources the subtitling of TED Talks so that big ideas can spread across languages and borders; and the educational initiative TED-Ed. TED also offers TED@Work, a program that reimagines TED Talks for workplace learning. TED also has a growing library of original podcasts, including The TED Interview with Chris Anderson, WorkLife with Adam Grant, TED en Español, Far Flung with Saleem Reshamwala and How to Be a Better Human.