Rainer Hughes kicks off with its initiative: Little Steps To nurture the stars of tomorrow 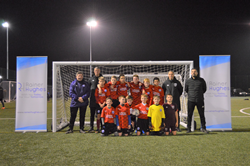 We have been part of the West Ham family for a few years now and we are nothing short of proud of the ladies and the way they have been performing. It’s a passionate and ambition driven team that just gets better with every passing year

Rainer Hughes through their official partnership with West Ham United Women’s team, put on a night of training the Billericay Football club under 11’s. The initiative namely ‘Little Steps – To nurture the stars of tomorrow’ took place at the Billericay Club, training grounds on the 24th of November 2021. With the help of the Barclay's FA Women’s Super League top contenders, West Ham United; Rainer Hughes puts forth the session in the hope to encourage more youngsters to take up the sport.

This drill also hoped to inspire more girls to take up the sport and even compete at a higher level. The session was attended by the Captain of the West Ham Women’s team, Gilly Flaherty and Assistant Manager, Paul Konchesky.

Co-incidentally, Paul Konchesky has also been a part of Billericay FC until last year where he served as assistant manager to the senior team. He also played for the senior team as a defender during 2017-18 season. Currently, Paul is serving as the assistant manager of West Ham United Women’s team for the 2021 season and has been a successful asset to the team.

“The Billericay family is a new venture for us, but it brings us immense pleasure to witness kids pursue sports and play at a competitive level, even at a young age. We have been partners with West Ham Women's team for a few years now and we are nothing short of proud of the team and the way they have been performing. It’s a passionate and ambition driven team that just gets better with every passing year and we are extremely pleased that they were able to take out time to support our initiative,” said a representative at Rainer Hughes.

West Ham United Women’s team captain, Gilly Flaherty added, “I started playing football at the age of 9 at a local park with my dad and played for a grassroots team nearby. The grassroots games is massive and if you don’t have the grassroot players then you don’t have football. It is also because of organisations like Rainer Hughes that fund and sponsor teams, which is critical as their support goes a long way for teams to progress and do better.”

Ex West Ham United and Billericay FC player and present-day Assistant manager, WHUM, Paul Konchesky added, “It is very important to keep up the grassroot games as that’s where it all starts."

“It is because of organisations like Rainer Hughes, no matter what age group and irrespective of boys’ team or girls’ team, football exists. The exposure that young teams receive through these exercises is massive,” Paul added.

Rainer Hughes have been a big supporter of sports and is currently sponsoring both West Ham United Women’s team and the Billericay FC under 11’s. When asked why they are so involved, RH spokesperson said, “We just want to play our part and make sure local talent is supported and looked after. It’s not a lot, but as the initiative suggests – It’s the Little Steps that count.”