Year after year, one man’s inspirational fight against ALS inspires the community to join the Napa Valley Ride to Defeat ALS. 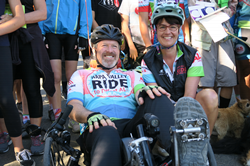 Miles McConnell, who has been living with ALS since 2015, with his wife of 22 years, Dubie Breen, at the Napa Valley Ride

“ALS has given me many things to be grateful for, and top of mind is all of you; a community of people dedicated to supporting those living with this disease and committed to funding a future without it.”

“This may be my last year being physically able to ride a bike,” said Miles McConnell, who has been living with ALS since 2015.

After Miles was first diagnosed, he and his wife of 22 years, Dubie, were devastated, but decided that this news wasn’t going to stop them from doing the things they loved together. Miles has always been passionate about running, skiing, and cycling, so when he heard about the Napa Valley Ride to Defeat ALS and Walk, he took his diagnosis of ALS as an immediate call to action to help others.

Amyotrophic lateral sclerosis (ALS), also known as Lou Gehrig’s Disease, is a fatal, neurodegenerative disease that attacks nerve cells in the brain and spinal cord. ALS is not contagious and does not discriminate – it affects men and women of all ages, ethnic backgrounds, and socioeconomic communities around the world. For unknown reasons, those who have served in the military are diagnosed with ALS nearly twice as often as the general population. People with ALS lose their ability to move, speak, swallow, and eventually the ability to breathe, while all five senses typically continue to function normally. The average life expectancy of a person with ALS is two to five years from diagnosis. At this time, there is no known cure.

This will be the seventh year that Miles and his family are participating in the Napa Valley Ride, and the fourth that he has served on the event planning committee as Co-Chair. Since 2016, Team (s)Miles has raised awareness and funds for the ALS community through many Golden West Chapter community outreach events. To date, Team (s)Miles has raised more than $500,000 to advance the search for effective treatments and cures for ALS.

“There is no better example of collaboration, dedication and determination in the fight against ALS than that which we see from Miles, his family, and their community of Team (s)Miles,” said Sheri Strahl, Chief Operating Officer, of The ALS Association Golden West Chapter. “The Napa Valley Ride is an essential part of our efforts to raise funds and secure the resources necessary to advance critical research projects, our care services programs, and our public policy initiatives. As a result of increased awareness and support, the Golden West Chapter can continue to promote groundbreaking scientific and therapeutic discoveries that enable a better understanding of the causes of ALS, developing effective treatments, and ultimately, finding cures for this devastating disease.”

“ALS has weakened my legs and made it impossible to walk without support,” said Miles. “But I’m still planning to climb into the saddle of my treasured recumbent e-bike and ride the road with many of you this year! ALS has given me many things to be grateful for, and top of mind is all of you; a community of people dedicated to supporting those living with this disease and committed to funding a future without it.”

Miles invites the public and supporters from the Bay Area and beyond to join the event virtually in support of The ALS Association Golden West Chapter. The Napa Valley Ride to Defeat ALS and Walk became the largest single annual fundraising event fueling the search for effective treatments and cures for ALS in 2019 and continues to be the leading event nationwide. All of the funds raised will support the interdependent mission priorities of The ALS Association Golden West Chapter in care services, public policy, and research.

To support Miles McConnell and the 1,800+ families facing ALS served by the Golden West Chapter, please make a donation to Team (s)Miles or sign up to join the 2021 Virtual Napa Valley Ride by visiting http://www.NapaValleyRide.org.

About the ALS Association Golden West Chapter:
Our mission is to discover treatments and cures for ALS, and to serve, advocate for, and empower people affected by ALS to live their lives to the fullest. Our vision is to create a world without ALS. The Golden West Chapter serves people with ALS and their families in 31 counties throughout California and in the state of Hawaii. Everything we do advances the search for effective treatments and cures for ALS. For more information, please visit us at http://www.alsagoldenwest.org or email us at info@alsagoldenwest.org