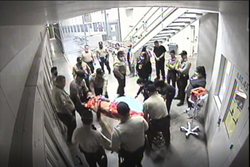 Surveillance image showing Ortiz being extracted from his cell after the assault.

The settlement is believed to be the largest ever paid by Maricopa County to a single individual arising from a jail-related injury.

On June 7, 2022, a dismissal was entered as the final step in resolving a lawsuit brought by a young man allegedly assaulted in a Maricopa County jail. Maricopa County and Sheriff Paul Penzone agreed to pay $11.75 Million dollars to Brian Ortiz who allegedly suffered a brain injury while in the custody of MCSO. Ortiz was 18 years old at the time. The settlement was approved by the Maricopa County Board of Supervisors on May 18, 2022.

The lawsuit was filed on September 8, 2020 in the United States District Court of Arizona. The lawsuit was filed by the mother of Ortiz and entitled Selene Ortiz as guardian of Brian Ortiz, Et Al. v. Maricopa County, Et Al. The case was designated #2:20-CV-01746-SPL and Steven P. Logan was the presiding judge. The lawsuit named the County, Sheriff Paul Penzone and several deputies and jail medical workers as defendants.

The lawsuit alleged that Maricopa County, Sheriff Paul Penzone and other individuals they employed failed to protect Ortiz when he was in custody. The lawsuit further alleged that these parties were deliberately indifferent to Ortiz’s serious medical needs after he was assaulted. The lawsuit asserted claims for alleged violations of Ortiz’s constitutional rights under the Eighth Amendment pursuant to 42 U.S.C. § 1983.

The introduction section of the Complaint alleged that, “Ortiz was punched, kicked and stomped by another inmate almost 50 times” and “was beaten with such violent force that he fell into a coma and did not regain consciousness for more than two months.” This section also alleged that “during the assault and in the critical time period following…no one came to his aid…[and] Ortiz was not so much as placed in an ambulance until approximately 2 hours and 15 minutes after he was laying unconscious on the ground, seizing and bleeding from his head.”

Ortiz and his mother were represented by C. Tony Piccuta of Scottsdale Injury Lawyers, LLC. Piccuta and Scottsdale Injury Lawyers, LLC are currently handling a number of high-profile cases against law enforcement. This includes a wrongful death shooting case against a Mohave County Sheriff’s Deputy that occurred in April 2021. That action is entitled Rose v. Farney, Et Al. and was filed in the United States District Court of Arizona on April 6, 2022.