SONIC LENS becomes first sonic branding agency to win "Brand Strategist of the Year” at 2022 Transform Awards NA for their innovative approach to music and sound in branding. 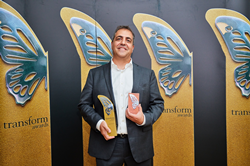 "His contribution to brands is invaluable. He creates fantastic work which is equally scientific as it is creative. His work centers around the concept of ‘music intelligence’; a sophisticated, data-driven means of consulting brands."

Marco Vitali, founder of Sonic Lens Agency, has been named "Brand Strategist of the Year" at 2022 Transform Awards NA, the global magazine for rebranding and brand development. This is the first time this highly prestigious recognition is awarded to a music agency.

According to Transform Magazine, "His contribution to brands is invaluable. He creates fantastic work which is equally scientific as it is creative. His work centers around the concept of ‘music intelligence’; a sophisticated, data-driven means of consulting brands. Vitali believes sound is a powerful branding tool, yet it is often overlooked. This new process, he believes, will revolutionize the world of branding by making creative work more holistic, powerful and cohesive." As a result, his 3 year old boutique agency has been nominated for every sonic rebrand and has won 13 gold awards.

"Being the first sonic branding agency to receive this special recognition for 'brand strategy' is an incredible step forward in my personal mission of working closer, earlier and in a more integrated fashion with our clients and their branding teams, as opposed to adding sound at the end of the process.” says Marco Vitali. "Sound should not be an afterthought – it should be woven into the entire process because it has incredible power to drive holistic branding, inspire visual branding, and empower engagement and deeper brand connection to consumers.”

SONIC LENS is a new breed of agency that sits at the intersection of marketing and music. Their “music intelligence" approach can best be attributed to the uncommon path of its founder, Marco Vitali. A journey that began as a child violin prodigy at Juilliard made a sharp detour onto Wall Street where he earned master’s degrees in Marketing and Finance and gained analytical expertise which would later underpin the “Music Intelligence” process. He returned to music by starting a composer collective called Soundguild where he was picked up for management by super-producer Nile Rodgers (Madonna, Bowie, Daft Punk) and industry icon Michael Ostin (former President Warner Music and then Dreamworks Records). During this tenure, he collaborated as writer, producer and musician with some of the most incredible artists in the world including Nile Rodgers, Wu Tang Clan, RZA, GZA, Quincy Jones, Ceelo Green, Aviici, Q-Tip, Pete Rock, Organized Noize, Peter Wolf (J. Geils).

Marco recognized a growing need by global marketers for a more sophisticated approach to sonic branding than existed anywhere else and spent two decades perfecting the "music intelligence” process while serving as head of music at various top agencies.

His vast experience includes sonic branding across TV/Entertainment, FMCG, QSRs, Telecom, Pharma, News, Toys, and Cosmetics including 4 Fortune 100 brands and one of the “Top 10 Best Audio Brands of 2020.” In 2019, he left his partnership with Nile Rodgers to launch SONIC LENS as a “focused audio branding" agency and immediately set to work developing holistic sonic strategies and branding platforms for 3 global TV networks, all of which have won Gold at various global industry awards for branding. Every project since has either won Gold or been shortlisted and can be viewed at http://www.soniclensagency.com.

Oh what a night... with Sonic Lens at 2022 Transform Awards NASonic Lens wins "Brand Strategist of the Year" and wins bronze for "Best Use of Audio Branding"