Unitek Global Services, a leading provider of broadband infrastructure for North America, announced the immediate promotion of Derek Hutchins to Chief Operating Officer. Hutchins was a founding member of Hutchins Telecom, which grew to become one of the premier long-haul fiber development and service companies under his leadership. Heading the company from 2007 until its purchase in 2018 by Unitek Global Services, Hutchins continues to serve as the subsidiary’s President. As COO of UniTek, Hutchins will oversee the operations of the UniTek family of companies that provide broadband infrastructure services to North America. 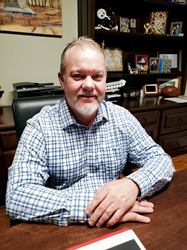 Mr. Hutchins’ primary responsibility will be overseeing the day-to-day service operations of UniTek and its family of companies.

Mr. Hutchins is a longtime industry veteran and a founding member of Hutchins Telecom. Under his leadership since 2007, Hutchins Telecom quickly became one of the premier long-haul fiber development and service companies in the U.S. It was this impressive growth and strong reputation for quality that led to the acquisition of the company as a subsidiary of Unitek Global Services in 2018.

From August 2018 to present, Derek continued to lead Hutchins as the subsidiary’s President. “His impressive leadership skills, deep industry knowledge, and strong work ethic is what led to his appointment as COO of UniTek,” said Charlie L. Smith, CEO UniTek Global Services, Inc.

In his new role, Mr. Hutchins’ primary responsibility will be overseeing the day-to-day service operations of UniTek and its family of companies. He will be working in close conjunction with the organization’s other executive leaders and those of each operating subsidiary as Unitek continues their efforts to provide world class infrastructure services to the rapidly growing North American broadband sector.