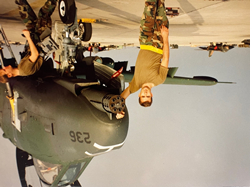 Semper Cares is an ongoing program developed to honor deserving veterans and their families by helping with major home improvements like solar panel installation. This Veteran’s Day, Semper Solaris is proud to provide the 17th and 18th Semper Cares Honorees, veteran hero Sgt. Bruce Calderon of Project Quebec, and veteran hero E-4 Sgt. Douglas Epley of Project Romeo, with a full solar panel system and installation at no expense!

Upon learning of both veteran’s history of service and sacrifice, Semper Solaris has chosen two Bay Area veterans as the 2022 Veteran’s Day Semper Cares Initiative honorees.

Sgt. Bruce Calderon served in the Marines as an intelligence analyst. During his years of service, he was deployed to Afghanistan and later stationed in Japan and South Korea—where he met his wife, Minji. Most of his military service was spent overseas, so Bruce lacked a support network when he returned to the United States. As a result, he struggled to transition to civilian life in the San Francisco Bay Area. His struggle led him to Swords to Plowshares. This past summer, he completed a legal internship with Swords to Plowshares’ Legal Services program. Bruce now lives with his wife in San Lorenzo and looks forward to finishing law school and becoming a public defender.

Semper’s second honoree, E-4 Sgt. Douglas Epley, served in the Air Force, during the first Gulf War as an Electronic Countermeasures Operations Specialist on the aircrafts. He was also stationed in Korea and the UK where he dedicated over six years of his life to service. Doug, as he likes to be called, has many awards and achievements from his many certifications and recognitions to his Air Force Achievement medal from Operations Desert Shield and Desert Storm. His humility and grace only touched on some of the many achievements and awards he has been given throughout his service. Doug has been married to his lovely wife Kayla for 29 years. He met his wife when she was going through her first bout of breast cancer, and 29 year later, being cancer-free for six years now, they are still very much in love. Doug has also survived his own case of throat cancer and he too is cancer-free, as of four years. They both live and appreciate everyday in complete gratitude and consider themselves true survivors.

Many men and women have given so much for America’s freedom that Semper Solaris founders, Kelly Shawhan and John Almond, felt strongly about giving back to our veterans. The Semper Cares Initiative was founded to provide relief to veterans from high energy costs by awarding them with the security of energy independence. Semper publicly requests to help identify these courageous and deserving warriors in order to help tell their stories and make a difference in their lives.

Semper Solaris is a veteran-owned and operated company located in Bay Area, California that specializes in solar panel and battery storage installations, such as the iconic Tesla Powerwall. Help us continue the Semper Cares mission by spreading the word to friends and families of deserving veterans! Have a veteran in your life you want to honor? Go to SemperCares.com to nominate them today.