Half of Adult U.S. Sports Fans Plan To Bet on the World Cup

Survey from BettorOff, the sports wagering information platform, revealed that half of adult U.S. sports fans plan to bet on the World Cup that starts Sunday — with 18% planning to bet on soccer for the first time and a majority planning to bet more on soccer after the global event. 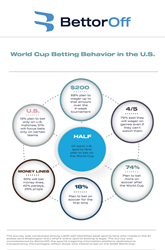 Half of Adult U.S. Sports Fans Plan To Bet on the World Cup

“There is an exciting intersection of interest and opportunity surrounding the World Cup,” said Alex Dubin, CEO and founder of BettorOff. “As pro soccer and online sports betting explode across the US, we expect this World Cup to be a tipping point for soccer fans and bettors across the country.”

Half of adult U.S. sports fans said they plan to bet on the FIFA World Cup that begins Sunday in Qatar, according to a survey commissioned by BettorOff, the sports wagering information platform dedicated to transparency in picks and results.

Seeming to reflect the expanding interest in soccer in the U.S., as well as the influence of major sporting events, 49% of self-described sports fans said they planned to bet, 18% of those will be betting on soccer for the first time, and 74% said they planned to bet more on soccer after the World Cup. The 2026 World Cup will be hosted in North America, with the majority of sites in the U.S.

“There’s this amazing intersection of interest and opportunity that’s syncing with the World Cup’s arrival,” said Alex Dubin, CEO and founder of BettorOff. “Professional soccer is exploding — in TV ratings, merchandise sales and so many other ways. And sports wagering availability continues to grow, providing the participation and competition that fans crave.”

It could be a boon to the major sportsbooks in the U.S. The total global handle for the 2018 World Cup in Russia was an estimated $146 billion, according to FIFA. At the time, only three U.S. states (Nevada, Delaware and New Jersey) offered legal sports betting, and it was largely limited to retail locations.

Among the other key findings from the survey:

The survey was conducted among 1,500 self-identified adult sports fans who reside in the 21 states (and Washington D.C.) where online sports betting is legal. In seeking to understand wagering interest ahead of the World Cup, the BettorOff survey also found:

ABOUT BETTOROFF Founded in 2020, BettorOff is an enhanced social media platform catering to the underserved sports betting community by providing full transparency and accountability of picks. BettorOff delivers an unparalleled set of features, including odds, insights, competitions, and detailed leaderboards, designed to streamline and enhance a bettor’s experience. BettorOff is available in the App Store and Google Play. For more information, visit BettorOff.com.