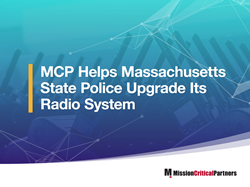 A P25, Phase 2 system provides two talkpaths, while analog and P25, Phase 1 systems only provide one. So, the new system will double capacity across Massachusetts without the need to add more frequencies.

Mission Critical Partners (MCP) announced today that the project to implement a new statewide land mobile radio (LMR) trunked system for the Massachusetts State Police (MSP) has moved into design, staging, and preliminary testing of the core infrastructure. The project, which began in 2019, is scheduled to be completed in 2026. The Massachusetts Executive Office of Technology Services and Security (EOTSS) is managing the project.

The new system complies with the Project 25 (P25), Phase 2 standard for digital radio systems. It replaces an analog trunked system that had been implemented in the mid-1990s and which was serving the eastern two-thirds of the state. It also replaces a P25, Phase 1 trunked system that was serving the western third and which had been implemented in 2011.

The legacy systems had reached end of life, meaning that they no longer were receiving vendor support and replacement parts were difficult, if not impossible, to procure, which made operation and maintenance exceedingly challenging. Another challenge concerned interoperability between the two systems, which was achieved via gateway patches, which is less efficient than the native interoperability that will be provided by the new statewide system.

Another advantage of the new system is that it provides enhanced coverage, capacity, and reliability, especially when compared with the legacy analog trunked system. Regional and local public-safety agencies — as well as the Massachusetts Department of Correction — may be able to join the system, which not only will enhance their radio communications but also interoperability between them and MSP.

“A P25, Phase 2 system provides two talkpaths, while analog and P25, Phase 1 systems only provide one. So, the new system will double capacity across Massachusetts without the need to add more frequencies,” said Scott Neal, MCP director of wireless services, who previously was a major with the Pennsylvania State Police (PSP) in charge of PA-STARNet, the PSP’s statewide LMR system.

In addition, a P25, Phase 2 system provides advanced capabilities that are lacking in P25, Phase 1 systems and especially analog systems. The new system also supports paging, which is important to fire departments in the state, particularly volunteer departments. This is intended to enable fire departments that join the new system to retire their legacy paging systems, many of which also have reached end of life.

“This is a big plus for agencies that can transition to the new system for paging,” Neal said. “First, they will not have to maintain a separate paging system, which can be costly and problematic, especially for end-of-life systems. Second, the coverage footprint of a P25 radio system typically is larger than a paging system’s footprint. It’s noteworthy that MSP made sure that its new system supports paging.”

Finally, portable radios currently used on the system that have become obsolete are being replaced as part of the project.

“Providing public safety and first responder personnel with the necessary equipment to facilitate reliable communications is essential to their ability to safely respond to an emergency situation,” said Secretary of Technology Services and Security Curt Wood. “I am grateful for this partnership between the Commonwealth and Mission Critical Partners to deliver on this important public safety project.”