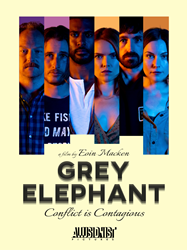 “Grey Elephant feels immediately nostalgic and close to home, peering back into an unprecedented shared human moment, when this unstoppable force of nature forever altered all of our relationships.” - Ammar Ramzi Mahmood, Producer

Grey Elephant dryly observes the social and emotional complexities of two couples meeting together for the first time after months of being on lockdown due to the coronavirus pandemic. It tells the story of married couple Lucy (Flint) and James (Brandt), who decide to host dinner for James’ best friend, Will (Lemon) and his new girlfriend Alexa (Richards). The dinner quickly highlights both couples’ pent up fears, frustrations, desires and insecurities, which escalate to explosive degrees when an unexpected wild card is added to the mix.

“This film was made in the height of the COVID pandemic, in the midst of an enigmatic year for everyone. We recognized that, although this is a specific period in history and many people wanted to capture the moment, we needed to focus our story on the perennial complexities of the human experience,” says Eoin Macken. “It’s remarkable that I was able to partner with Allusionist Pictures to create such a delicate, beautiful film, especially during COVID. I’m thrilled they managed to safely get this film made.”

Allusionist partnered with Macken to finance and produce the film. “Eoin’s story gave me a sense of comfort and acceptance that I needed coming out of a difficult lockdown. The story resonates across borders, social barriers, and languages; anyone could find solace in recognizing that it’s not just them! That we all went through this together.” says Meriam Alrashid, Executive Producer and Allusionist Co-Founder.

Ammar Mahmood, Co-Founder at Allusionist Pictures emphasizes this theme — “Despite COVID being the catalyst for the conflict these characters have, Eoin’s script didn’t turn the virus into the scary invisible antagonist in an overblown thriller. Instead, Grey Elephant feels immediately nostalgic and close to home, peering back into an unprecedented shared human moment, when this unstoppable force of nature forever altered all of our relationships.”

About EOIN MACKEN
Macken is well known as the series lead on NBC’s hit dramas La Brea and The Nightshift, the Netflix SyFy adaptation of George RR Martin’s Nightflyers, as well as the cult BBC drama Merlin. He can be seen in the Millenium/Lionsgate thriller Till Death, starring opposite Megan Fox. Macken has also recently directed the film Here Are The Young Men, starring Anya Taylor-Joy, Dean Charles Chapman and Travis Fimmel, which released in early 2021, after finishing its festival circuit where it closed out the Raindance Film Festival in the UK. He previously directed the highest rated episode of season 4 of The Night Shift for NBC, and the cult indie feature Leopard, starring himself, Tom Hopper and Jack Reynor.