Community leaders express their joint commitment to education, healing, and reconciliation as they assemble for the ground-breaking ceremony of the Holocaust Garden of Hope on Monday, November 14, 2022. Construction begins this week on this free to the public open-air museum. This Garden is designed to impact the next generation to take a stand against antisemitism, persecution, prejudice, and indifference. 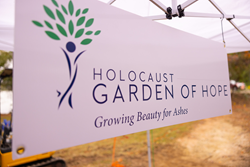 “Today history is not just re-told in the Garden; rather, history is being made. The Holocaust may seem far removed from Texas and, indeed, the United States. But this remarkable Garden brings stories, pictures and questions to Texas -- freely to all who want to explore.” – Dr. Susanna Kokkonen

The community assembled – first for a VIP luncheon at Raffa’s Restaurant for donors, dignitaries, educators and other civic and governmental leaders. After a summary of the history of the Holocaust Garden of Hope (HGOH) by Mitch Jerome, Holocaust Remembrance Association founder and president Rozalie Jerome shared her passion for the Garden project and officially recognized the numerous individuals involved in its development. Award-winning broadcast journalist Shara Fryer served as emcee and hosted a panel interview with the Consul of Israel to the Southwest, Elad Shoshan, and the Consul General of Germany, Kai Hennig. Shara’s family connection to the Holocaust and World War II supplied a golden thread that wove the words of each participant into the tapestry of the day’s presentation.

Immediately following the luncheon, the official ground-breaking ceremony began with the blowing of the shofar, followed by an opening prayer by Rabbi Brian Strauss, senior rabbi of Congregation Beth Yeshurun. The Machol Israeli Dance Company performed a moving dance to “Ein Od Milvado,” and Consul Shoshan and Consul Hennig shared additional brief insights. Claudia Kiesinger, repentant descendant of Nazi perpetrators and U.S. Director of the March of Remembrance, shared official remarks sent by German Pastor Jobst Bittner, founder of the International March of Life/March of Remembrance movement. A moving message penned by renowned Holocaust scholar and author Dr. Susanna Kokkonen was also read. Dr. Kokkonen is the author of the exhibit panel texts for the eight exhibits being built for the Holocaust Garden of Hope.

The crowd transitioned from the restaurant to the adjacent site of the Holocaust Garden of Hope. Lake Houston Partnership directed an official ribbon-cutting. After a brief explanation of Kristallnacht, the “Night of Broken Glass” that marked the turning point for increased persecution of German Jews prior to World War II, Child Holocaust survivor Ruth Steinfeld shared how that night had been the beginning of the end for her family. The Nazis ransacked her parents’ home and forcibly seized her grandfather and father. “That’s the night my life changed forever,” she explained. Her parents were murdered in Auschwitz; miraculously her mother had the courage to surrender Ruth and her sister to strangers who were able to arrange for the girls’ survival in hiding. In attendance were a number of Holocaust survivors, including Morris Narunsky and Dr. Charles Guez, as well as second, third and fourth generation descendants. Descendants of liberators were in attendance as well, including Barb Isom, Cherri Huber and Shara Fryer.

Staff, volunteers, donors and investors alike came to show their dedication to sensitizing hearts to the issues of the Holocaust with this open-air museum as it blooms on the banks of Lake Houston. The Holocaust Garden of Hope’s creative and advisory teams were represented by:

As a sign of breakthrough and a call to remembrance, the sound of the shofar accompanied the actual groundbreaking, as shovels of dirt were turned over and tossed on the grounds of the HGOH. City of Houston Mayor Pro Tem Dave Martin passionately stated his pride in Houston and Kingwood hosted the March of Remembrance the last ten years and now the Holocaust Garden of Hope. Martin stated, "Your dedication to continued peace and unity in our community is greatly appreciated. On behalf of all the citizens of Houston, I thank you." On behalf of US Congressman Dan Crenshaw, Cameron Chottiner presented a Certificate of Congratulations and Commendation. Longstanding advocates for the initiatives of the Holocaust Remembrance Association Rabbi Dan Gordon of Temple Beth Torah and Rev, Doyle Theimer of Christ the King Lutheran Church blessed the crowd and the project with the reciting of the priestly blessing in Hebrew and English.

The week prior to the ground-breaking, Brian Mahoney of the acclaimed Tellepsen Construction Company started Phase One by clearing the land to build Houston's Holocaust Garden of Hope. One third of the funds have been raised. Two million dollars is still needed to build exhibits three through eight. For more information on Growing the Garden and planting a legacy through donations and corporate sponsorships, Rozalie Jerome can be contacted at rozaliej@hra18.org .The Garden will be free to the public and is designed to highlight the experiences of children during the Holocaust. Stories of survivors, perpetrators, upstanders, liberators, and bystanders growing the Garden and planting legacies will be told in a way that provokes us all to examine our own hearts. As Dr. Susanna Kokkonen so poignantly expressed:

“As we see dark clouds around the world, I would think that our time is becoming a time of increasingly important moral choices. This Garden will not be telling you what to do. But, my hope is that it will cause you to think about why you do what you do. At the same time, the Garden shows, in a beautiful and sensitive way, human friendship, love and strength when faced with adversity.”

“Today history is not just re-told in the Garden; rather, history is being made . . . But this The Holocaust may seem far removed from Texas and, indeed, the United States. But this remarkable Garden brings stories, pictures and questions to Texas -- freely to all who want to explore.” – Dr. Susanna Kokkonen

The rain holds back for Holocaust Garden of Hope groundbreaking ceremony

Mayor Pro Tem Dave Martin,Cameron Chottiner on behalf of Congressman Dan Crenshaw with key players for the success of Holocaust Garden of Hope