Cruz Control & Lions Group Have Partnered Up With High Tolerance, C&M Entertainment And Black Squad For A Special Show In Barclays Center. The Ball Drops In Brooklyn, a highly-anticipated sold-out show expected as Future takes the stage at Barclays Center in New York 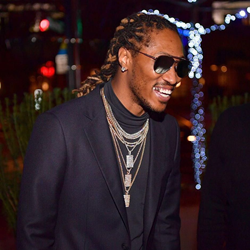 "No better way to end 2022 than with a show in NYC at Barclays Center. Happy to be in one of my favorite cities in the world."

Grammy Award winning artist, Future Hendrix Cash is set to return to the stage in New York, December 30th, 2022 in Brooklyn at the Barclays Center for a spectacular show, The Ball Drops In Brooklyn. Other artists joining the rap sensation include Lil Uzi Vert, Chinese Kitty and Christian Combs. After releasing the chart-breaking album, I Never Liked You, vaulting from No.30 to No.1 on the Artist 100, returning as the top musical act in the U.S. for 5 total weeks, Future is headlining a show that is highly anticipated to be a sold out event. Future is set to take the stage to perform some of his greatest hits as well as music from his new album. Future is leading three charts currently simultaneously for the first time with the success of his new album, I Never Liked You. All 16 songs from his new album have charted on the Billboard Hot 100. Future currently has 2 No.1 hits and 9 top 10 hits on the Billboard chart, making the rap icon the fifth most in the chart’s history among rappers.

The Ball Drops In Brooklyn, is set to be a teaser for his much anticipated tour in 2023. It will be Future’s first time performing since 2017 in New York City, making this show one of his rare appearances over the years. Future’s fan base has grown globally and he has become an elusive act. Future has become more than just a rapper. He has become an icon and broken the boundaries of being an entertainer and has become more of a social concept, a tastemaker across every category including fashion, music, lifestyle, art and culture. He’s catapulted into a category of his own. “No better way to end 2022 than with a show in NYC at Barclays Center. Happy to be in one of my favorite cities in the world. Get ready to party together NYC,” said Future Hendrix.

Ricardo Cruz, CEO of Cruz Control along side Losseny Samake, CEO of Lions Group took their teams and joined forces to conceptualize this special iconic show on a rainy Saturday in the basement of a midtown top club— a brunch party raging above their heads. As soon as the ice broke, the work on this show and its after celebrations began. High Tolerance, the fast-growing enterprise based out of LA that’s been on a one way success mission since their launch, along with the industry’s new forces to be reckoned with C&M Entertainment and Black Squad – came together to build this one of a kind organization and experience for all to enjoy during no better weekend—NYE. One dinner became many, one artist became a lineup, and business partners became friends. Together, they are ready to start 2023 with a bang. “There’s no better person to get ready for the New Year than with Future himself. He’s had an amazing year and we wanted to end 2022 by bringing the biggest artist to the biggest city to close out the year. We have partnered up with some of the most successful companies in the industry to bring a show of this magnitude to the city of New York.” said executive producer of Cruz Control Entertainment, Kina Jonas. “Our team is excited to bring out one of the top artists of the year for a memorable show. Future has changed the game of music and fashion and there’s no one better to party with New Years Eve week! We’re bringing an experience not just a show,” said High Tolerance, Vice President of Communications.

Hospitality and nightlife gurus, Lions Group, Mr. Miller, Nii and Felix, have come on board as the experts in the world of celebrity entertainment. The show is expected to be an evening of music with the greatest chart topping hits and artists headlined by Future Hendrix. Lions Group is trusted to host private and public parties for the biggest names in Hollywood such as Future, Lil Baby, Moneybagg Yo and many others. The hospitality group also hosts the official Rolling Loud after parties, A-list celebrity EP and album release events and more. “We are excited to take what we do to the next level, this feels like fate, we are ready for whatever is next,” says Losseny Samake aka Mr. Miller, Co-Founder of Lions Group. “Giving back and change will always be the primary mission for our company. C&M Entertainment is committed to bringing next level entertainment to the Big Apple. Future has become a staple in our culture and we are happy to have him for our show. Music is one way we feel like we can bring people together and that’s one of our main focuses as a company,” said CEO Chinemeze Nwadike of C&M Entertainment. Cruz Control Entertainment is no stranger to sold-out shows with previous events in the arena such as Mary J Blige.

Tickets for the show are on sale now thru Seat Geek http://www.seatgeek.com.

Three promoters of African origin and one DJ from the Dominican Republic who became the voice of the team, came together. Each of them with their own clientele and over a decade of experience in nightlife formed an alliance. The alliance became known as, The Lions Group. Losseny “Mr. Miller” Samake and Felix “The Sultan” Abdul who were already a dominant duo in nightlife for many years, added a 3rd partner Nii “Nii The Plug” Quaye and resident DJ Rodney Castillo. The Lions Group created exclusive hip-hop events 5 nights a week at various locations around the city where professional athletes, artists, actors all came together to bring New York City hip-hop life back to life.