Artist Aims to Engage a New Generation in Peace Activism

Singer-songwriter, human rights, and peace proponent Lauren Waller passes along a persuasive message of hope to a new generation through her rendition of HAPPY XMAS (WAR IS OVER!). 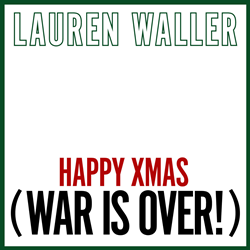 Waller encourages important and impactful conversations of compassion and unity of all humanity.

Indie-pop artist Lauren Waller’s powerful, soulful version of Happy Xmas (War is Over) continues the path of peace activism that songwriters John Lennon and Yoko Ono actively pursued. Waller is an admirer of the couple’s message in this song, imploring the world to come together and stop all the fighting. Waller’s performance appeals to a global audience to be personally accountable for their actions and let peace prevail.

The Russian - Ukraine war is raging; there is massive civilian suﬀering. Vulnerable people worldwide are experiencing extreme hostilities, violence, destruction, and death. Waller’s relevant release amplifies the voice of a new generation, continuing the work of peace activism and empowerment. The holiday season is a time for reflection. Waller encourages important and impactful conversations of compassion and unity of all humanity. She calls on the international community to look inward, show a capacity for change by showing empathy towards others, stop cruelty, and advocate for the end of the conflict.

Waller is multi-skilled, an all-around creative with interests and abilities in many fields. She holds a degree in theatre production and design and has pursued art of varied mediums. As a singer-songwriter and performer, she has released numerous original songs with distinctive wide-ranging vocals and insightful story-telling lyrics. These releases include two EPs and a collection of singles, with works that have streamed worldwide. Waller has opened live, supporting world-renowned performers, including Tower of Power, Wilson Philips, Jim Messina, Basia, Peter Noone, Nancy Wilson, Flock of Seagulls, Anna Nalick, and Morgan James. Waller has received numerous press accolades; the Storm Report noted, “She has the voice of a superstar.” Aesthetic Magazine states, “Her musical artistry is unmatched even by big names in pop.” “Waller’s music is both intimate and electrifying,” reports V13. Waller is looking forward to the release of her debut album early next year. Singles oﬀ the upcoming album Lift You Up and Let Go are already receiving airplay.

Waller has a long history of civic participation and wide-ranging lifelong learning. She is currently expanding her knowledge and talents as a candidate for a Juris Doctor degree in United States law. She has volunteered for many years as a mock trial coach for the Constitutional Rights Foundation. This Los Angeles-based non-profit disseminates law-related education in the United States. The organization educates young people about civic participation in a democratic society. The program teaches students how the justice system works and educates them about their constitutional rights. Waller has spent countless hours preparing high school students for the Mock Trial Competition, in which schools form teams and compete against other schools in replicated criminal trials.

Waller also established a Mock Trial Leadership award that preferences marginalized students within the Los Angeles program. Waller has been honored by the City of Los Angeles and the State of California as a “stellar example of a great civic leader” for her ambassador role in representing the Irish community of Southern California in the International Rose of Tralee Festival. The festival celebrates Irish culture through the beauty, personality, character, achievements, and social responsibility of women of Irish heritage. The Rose of Tralee Festival brings candidates to Ireland from all over the globe. Waller had the opportunity to perform her original song Never Were on live television broadcast to the Nation by Ireland’s public service broadcaster, RTE. Waller is also a sustaining member of the National Charity League, Inc., which embraces philanthropy, leadership, and culture.

Waller’s rendition of Happy Xmas (War is Over) can be found on all streaming services or listen on Spotify here.