This Christmas Eve, make an easy choice that benefits the planet and leave a glass of carbon neutral milk out for Mr. Claus 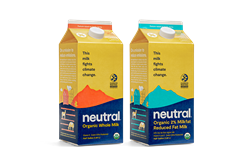 Neutral Foods, the nation’s first carbon neutral food company, is imagining a scenario where every household in the U.S. celebrating the tradition of leaving milk and cookies out for Santa chooses Neutral milk. Small changes can really add up to help with climate change.

According to the latest U.S. Census Bureau data, there are 123.6 million households in our country. A Pew Research study estimates that 9 out of 10 Americans celebrate Christmas equaling 111 million households potentially leaving milk and cookies out for Santa this Christmas Eve. Neutral’s carbon team calculates that this is the equivalent of eliminating 81,817 metric tons of carbon emissions from the atmosphere.

To further put this number in perspective and as illustrated in the attached infographic, if 111 million glasses of Neutral milk are poured for Santa on Christmas Eve, that’s the equivalent to 17,629 cars taken off the road, a year’s worth of electricity for 15,920 homes, and 28,310 tons of waste recycled instead of going straight into a landfill.

“Consumers can make a positive environmental impact simply by choosing Neutral in the dairy aisle,” said Marcus Lovell Smith, CEO, Neutral Foods. “Neutral is more than just a glass of milk at the breakfast table. It’s a decision to support farmers who are doing the hard work and adopting climate smart practices that will make critical changes to the carbon footprint of our agricultural system.”

Through its robust lifecycle analysis, Neutral knows approximately 72% of its dairy products’ greenhouse gas emissions occur on farms and invests directly in various on-farm carbon reducing projects. Neutral organic milk is the first dairy milk in the U.S. to measure and eliminate its climate impact. Its whole and 2% milk, half-and-half, and butter products are 100% carbon neutral from farm to fridge. Neutral products are available at more than 2,000 retailers, including Whole Foods Market and Sprouts Farmers Markets nationwide.

Additional Neutral investors are Mark Cuban and David Adelman’s Darco Capital, which led a celebrity round of investors, including LeBron James, John Legend, and Questlove. Japanese firm Global Brain, its CVC partners Kirin Holdings Company, Limited and Norinchukin Bank, and Craig Shapiro of the New York-based Collaborative Fund have also invested in Neutral and its vision of a more sustainable food system.