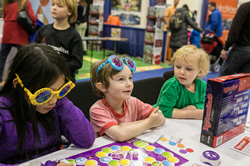 Attendees of the 2022 Holiday Chicago Toy & Gift Fair (CHITAG) will experience immersive events, interactive exhibits and activities for all ages.

“CHITAG is back, and we’re so excited to be celebrating our 20th anniversary with such a great lineup of sponsors, exhibitors, and activations,” said Mary Couzin, President of People of Play.

On December 10th and 11th the 2022 Holiday Chicago Toy & Gift Fair (CHITAG), North America’s largest toy & game fair open to the public, will be resuming their annual in-person event after a 2-year hiatus due to COVID. This marks the 20th year for CHITAG, which will take place at a new venue this year: the Donald J. Stephens Convention Center in Rosemont (5555 N River Rd Rosemont, IL 60018).

As one of the only toy and game fairs open to the public, thousands of families expected to attend will experience immersive events, interactive exhibits and activities for all ages. This year's highlights include a Gel Blaster Activation, craft and build at the Spaghetteez booth, fan favorite the Oscar Mayer Wienermobile, Giant Jenga games, the Beer and Board Game Garden is back, plus magicians and characters including Greg Heffley from Diary of a Wimpy Kid, sports mascots, and booths with the hottest holiday toys and games from industry leading companies.

Toy giant Goliath Group will also host a qualifying event for the North American Rummikub Championship on Saturday, December 10th at CHITAG. The winner will receive 2 round trip air tickets and $1,000 to compete in the 2023 Rummikub World Championship, which will take place on September 8-11, 2023 in Poland. The entry fee is only $25 and includes free admission to CHITAG, plus a Rummikub Premium Edition game (combined package value $45.00).

Also scheduled to be at the Fair is The Toy Coach Azhelle Wade who will be podcasting live. Parents can also meet Rachele Harmuth from ThinkFun and learn about the company’s new initiative to help kids strengthen their skills for Mental, Emotional, Social, Health (MESH) and how toys play a part in that.

“CHITAG is back, and we’re so excited to be celebrating our 20th anniversary with such a great lineup of sponsors, exhibitors, and activations,” said Mary Couzin, President of People of Play. “To celebrate the start of our 20th anniversary we are rolling back prices to 2003 when we first started this event. It’s a fun way to give back to our fans and community who keep coming back year after year.”

Families and visitors can make it a holiday shopping vacation/staycation weekend at the Rosemont with all-inclusive hotel specials. In addition to the CHITAG fair, Rosemont is home to the Fashion Outlets of Chicago, the NEW Sparkle Light Festival, free skating at Parkway Bank Park, indoor skydiving, a ton of dining options and so much more.

About People of Play
People of Play (POP) leads the global toy and game industry in promoting innovation, creativity, and connectivity. A one-stop source of community for industry professionals, aspiring inventors and people of all ages who love to play, People of Play hosts a wide range of events including the Chicago Toy & Game (ChiTAG) Fair, the Toy & Game International Excellence (The TAGIEs) Awards, the Young Inventor Challenge, the Inventor Pitch & Innovation Conference and the POP Roast.