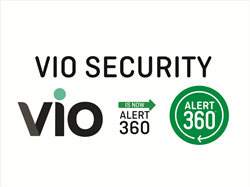 “On behalf of the Alert 360 team, we are honored to welcome Vio Security customers to Alert 360. We strive every day to stand out in the industry with our dedication to the highest quality security services,” said Richard Ginsburg, Alert 360’s Chief Executive Officer.

“On behalf of the Alert 360 team, we are honored to welcome Vio Security customers to Alert 360. We strive every day to stand out in the industry with our dedication to the highest quality security services. We are excited to extend our award-winning products and support to these customers,” said Richard Ginsburg, Alert 360’s Chief Executive Officer.

“Alert 360 is one of the highest-ranked security companies in America, and we are excited for Vio Security customers to experience an elevated level of service and new product offerings,” said Bill Mobley, Chief Operating Officer of Vio Security.

Founded nearly 50 years ago, Alert 360 provides local consulting, installation, and support for their security systems. The company also offers alarm monitoring of home security systems, business security systems, and smart home automation systems. A multiple, award-winning home security company, Alert 360 has earned Five Diamond Monitoring Center designation from The Monitoring Association. In Oklahoma, where the company is based, Alert 360 also has been voted a “Best Home Security Provider” and a “Great Companies to Work For.” In addition, for the past six years, Alert 360 has been selected as one of the “Best Places to Work.” Earlier this year, Alert 360 combined with My Alarm Center to further increase its service reach and team across the country.

“As a leading provider of home security and business security systems, we’ll continue to expand our service territory and customer base across the United States,” said Ginsburg. “Our team continually pursues emerging security technologies to help make our customers’ lives easier and more secure. We are proud that our dedication to excellence in both company culture and customer service has been recognized and we are able to deliver this service to new customers.”

Vio Security customers can learn more about the transition and their security systems services here.

Effective immediately, Vio Security customers can upgrade their systems or receive expedited support and installation services through any local Alert 360 security branch or by calling 888-642-4567.

About Alert 360
Founded in 1973, Alert 360 is one of the nation's oldest licensed alarm monitoring providers. Today, the company is one of the largest providers of monitored home security and home automation solutions to homes in the United States. The company monitors over two million security sensors and has an active base of over 80,000 CCTV cameras installed.