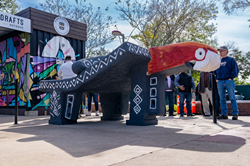 The sculpture, created by Chicano artists Jesus Cantu Medel, M.Ed., with the assistance of Joseph Cavazos, is set to honor the art community members who lost their lives during the COVID-19 pandemic in Houston.

The East End District added a ceremonial-type, mega-size metate to the award-winning Esplanade at Navigation. The sculpture, created by Chicano artists Jesus Cantu Medel, M.Ed., with the assistance of Joseph Cavazos, is set to honor the art community members who lost their lives during the COVID-19 pandemic in Houston.

A metate is a rectangular-shaped stone with a tripod leg base made of basalt stone, typically used for grinding corn seeds to make tortillas; according to Prof. Medel, the ceremonial metate he created reflects Pre-Columbian values and traditions of ancient Mexico and Central America to underscore respect for individuals and artists.

The metate cost $18,000 and took three months to build. The Houston Arts Alliance awarded the funds with the support of the “Museo Guadalupe Aztlan.” The public is invited to honor vigils and public events at the site.

About the Artist
Jesus Cantu Medel is an award-winning artist born and raised on the North side of Houston. He is a second-generation Latino American with roots in Guanajuato and Tamaulipas, Mexico. Jesus is also a product of the University of Houston – Central Campus, where he majored in Psychology and obtained a Masters in Education. His thesis focused on art education for the neo-indigents in the Chicano community. Jesus also pursued studies in the Colegio de Mexico sponsored by the “Becas Para Aztlan.”

About the East End District

The East End District was founded in 1999. Its mission is to revitalize the infrastructure and image of the District, attract more businesses, and increase economic activity in the area. Improvements include new infrastructure, beautification, security, and public safety, and workforce development. The East End District covers 16 square miles and borders Clinton Drive to the north, Loop 610 to the east, Telephone Road, and Interstate 45to the south, and the Houston Belt and Terminal Railroad to Highway59 to the west. Visit http://www.eastenddistrict.com to learn more about the East End District.