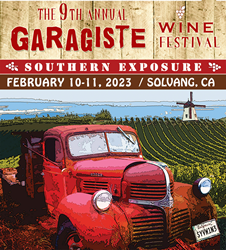 Southern Exposure starts the 2023 Garagiste Festival season which will bring hundreds of new wine discoveries from across California to wine lovers in Solvang, Paso Robles, Sonoma and Los Angeles

America’s Best Wine Festival, The Garagiste Wine Festival, returns to Solvang in Santa Ynez Valley on February 10th – 11th, offering rare access to over 30 of the most exciting small-production winemakers from the Santa Barbara County area. Tickets are now on sale here. Following on the heels of another sold-out year of events, the festival also announced its line-up for 2023, which includes Sonoma, Los Angeles and Paso Robles.

Hosted in Solvang, one of America’s 10 Best Small Historic Towns, for the ninth time, ‘Southern Exposure’ will be held at the landmark Mission-style Veterans’ Memorial Hall on Solvang’s Mission Street, which was named one of the US’ Top Ten Best Looking Main Streets.

“This charming town has a special place in our hearts, not least because it is at the center of some of the best winemaking in the world, but also because it is a beautiful and walkable place to spend a weekend –all while tasting over 150 ultra-premium, handcrafted small-lot production wines, and meeting their winemakers, under one roof,” said Doug Minnick, Garagiste Festival Co-founder.

2023 ‘Southern Exposure’ includes Garagiste’s Friday night signature "Rare & Reserve" tasting with a traditional Santa Maria-style BBQ dinner buffet on February 10th and the Grand Tasting on Saturday February 11th, which includes a Silent Auction filled with first-rate wine packages that benefit The Garagiste Festival Scholarship Fund at Cal Poly San Luis Obispo. Weekend Pass holders have entry into both events, along with lunch and a special Valentine’s Day treat. Sunday, February 12th is the popular Garagiste Passport Day, during which several participating wineries - including some “Garagiste Graduate” wineries who have poured with Garagiste in past, but have grown larger in over the years – will be offering special treats and discounts for Garagiste Festival attendees.

“We love our Solvang event,” continued Minnick. “The Vet’s Hall is right in the heart of the village and makes for a fantastic casual weekend of walking the town, seeing the sights, and enjoying the many restaurants, shops, and all that Solvang has to offer. It’s a great way to get a jump on celebrating with your Valentine. And Sunday’s Passport Day is a perfect excuse to take an extra day and night in town. Call in sick if you have to – we always do!”

Southern Exposure starts the 2023 Garagiste Festival season which will bring hundreds of new wine discoveries from across California to wine lovers in Solvang, Paso Robles, Sonoma and Los Angeles. Of the nearly 200 wineries showcased by the festival in 2022, 45 were new to the festival. The 2023 line-up, in addition to Solvang, includes: Garagiste ‘Northern Exposure’ in Sonoma (April 29), Garagiste ‘Urban Exposure’ in Los Angeles (June 17) and the ‘OG’ Festival in Paso Robles (November 10-11).

The Garagiste Festival premiered in Paso Robles in 2011 and is the only wine festival that exclusively features high quality wines from commercial California ‘garagiste’ winemakers. Unlike other festivals, the wines are poured by the winemakers/owners themselves, offering a rare opportunity to interact with the creative forces behind the wines, while making brand new wine discoveries. The festival expanded to the Santa Ynez Valley in 2013 to highlight the wines of Santa Barbara County and surrounding AVAs, as well as small production wineries from across California.

In addition to being named the US’ Best Wine Festival, the Garagiste Festival was named one of the ‘Top Nine Incredible Epicurean Vacations’ in the world by ABC News, “one of the premier wine events of the year,” by the LA Times and “Best Festival” by Sunset Magazine’s ‘Best of the West.’ The festivals are produced by Garagiste Events, a non-profit dedicated to furthering the education of future winemakers and those training for employment within the wine industry. Proceeds from the festivals support the Garagiste Festival Scholarship fund of the California Polytechnic State University at San Luis Obispo Wine and Viticulture Department.

Garagiste (garage-east) is a term originally used in the Bordeaux region of France to denigrate renegade small-lot wine makers, sometimes working in their "garages" (anything considered not a chateau), who refused to follow the “rules,” and is now a full-fledged movement responsible for making some of the best wine in the world. The Garagiste Festivals were the first to shine a light on the American garagiste winemaker in 2011.