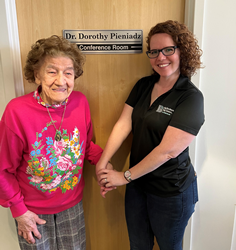 “Dr. Dorothy was a trailblazer who believed in the importance of education. I can’t think of a better way to honor her than by supporting such an important organization that was so near and dear to her." -Tristi Delaroca, executive director, Capitol Ridge at Providence

Benchmark Senior Living, the largest senior housing provider in New England, today announced they have partnered with Big Brothers Big Sisters of Rhode Island (BBBSRI), a mentorship program that pairs boys and girls across the state with adult role models, in a statewide fundraiser this holiday giving season. The fundraiser is being offered in honor of the late Dr. Dorothy Pieniadz, founder of BBBSRI and a former resident of Capitol Ridge, where she was deeply loved and respected by her fellow residents and associates.

Pieniadz founded BBBSRI in 1966 after hearing about a chapter in Canada. A teacher and the first female dean at what was then the Rhode Island College of Education, she had worked hard to break through the glass ceiling. Along the way, she was committed to mentoring and seeking opportunities for others who shared the same struggles she had.

“Dr. Dorothy, as she was known, was a trailblazer who believed in the importance of education and values we share here at Benchmark. I can’t think of a better way to honor her than by supporting such an important organization that was so near and dear to her heart,” said Tristi DelaRoca, executive director of Capitol Ridge.

In her final days, Pieniadz remained passionate about mentoring and considered BBBSRI her life’s work. “They can communicate with kids in a way that gets through. In many cases, no one has ever gotten through to these kids in this way before,” she said.

In 2022, 100% of BBBSRI mentees in their senior year graduated on time, 90% of parents saw academics improvements and 84% in social skills.

In addition to matching kids aged 7-14 with a minimum 18-month mentorship, BBBSRI operates two scholarship funds and The Donation Center Foundation of Rhode Island, which accounts for 70% of their annual operating budget. The Foundation collects donations of used clothing and household goods, which generates funds to support the mentoring program.

“Dr. Dorothy knew we were planning this drive and would be so honored to know it will continue on in her memory,” said Katje Afonseca, CEO of BBBSRI. “She enjoyed her last years at Capital Ridge and I’m glad we can honor her in this way.”

About Benchmark Senior Living
Benchmark is New England’s largest senior living provider with 64 independent living, assisted living, memory care and continuing care communities and over 6,000 dedicated associates providing compassionate care and outstanding experiences throughout the Northeast. The Waltham, Mass.-based company was founded over 25 years ago by Tom Grape with the purpose of Transforming Lives Through Human Connection. Since then, Benchmark has continued to set the industry standard, having won over a hundred local, regional and national awards for its care, programs and as a top workplace. Benchmark has been named one of the Top Places to Work for 15 straight years in The Boston Globe’s annual employee-based survey and received repeated recognition in FORTUNE’s Best Workplaces for Aging Services list. For more information, visit BenchmarkSeniorLiving.com.