A Sneak Preview of the Andre Rison and "Left Eye" Story is Airing on AndreRisonMovie.com Courtesy of Amazon Prime 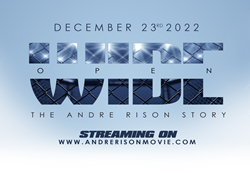 "Lisa and I eventually discovered most of our arguments and fights came from our childhood trauma, including her burning down my house," said Andre Rison. “We both experienced our parent’s abusive relationships which are detailed in the movie.”

Wide Open: The Andre Rison Story is coming to the big screen with a special sneak preview streaming Christmas weekend starting Friday, December 23, at 8 p.m. (ET) on http://www.AndreRisonMovie.com. The film will be available online for a limited time and will show in select theaters, video-on-demand, and streaming platforms.

Wide Open is the story behind NFL Hall of Fame nominated superstar Andre "Bad Moon" Rison’s ambition and determination to make it to the NFL while facing a racially charged environment. It details Rison’s tumultuous relationship with "Left Eye" Lopes, from the group TLC, his friendship with Atlanta Falcons teammate Deion "Primetime" Sanders, and other personal and professional milestones.