RationAle Brewing™ Encourages a ‘Wet January,’ Fueled by Free Six-Packs of its Non-Alcoholic Craft Beer to Moderate Your Boozing in the New Year

The offer to have friends gift friends a free six-pack of RationAle comes after data found that 35% of those aiming for a booze-free month had a drink within the first week, ruining their chance at an actual Dry January 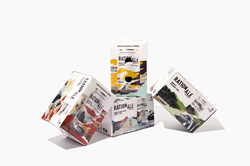 RationAle is making moderation easy by offering a free six-pack of its non-alcoholic craft beer with purchase of any one six-pack with code: BYFAB (Buy Your Friend a Beer).

"By making moderation taste good, accessible and affordable, there’s no excuse to choose a non-alcoholic beer alongside your favorite alcoholic beer in the quest to scale down your boozing," shares Jamie Fay, Founder and CEO of RationAle Brewing.

RationAle Brewing™, the San Diego-born, Sonoma-brewed non-alcoholic craft beer brand, is taking the pressure off beer lovers to go dry, this January, with the opportunity to still enjoy craft brews, with and without the booze, and bring their friends along for the ride — avoiding the shame spiral and drunken alter-egos they know all too well.

From December 23, 2022 through January 31, 2023, RationAle is making moderation easy with its online store (http://www.rationalebrewing.com) offering a free six-pack of its non-alcoholic craft beer with purchase of any one six-pack with code: BYFAB (Buy Your Friend a Beer).

According to Morning Consult, as many as 19% of Amercians participate in Dry January, each year, with that number increasing annually as alcohol moderation amongst consumers is on the rise. Mindful drinking app Sunnyside surveyed over 15,000 of its users aiming for a sober month in January; 35% fell off the wagon the first week by having alcohol, derailing their ambitions.

“The premise for Dry January ties back to people over-drinking through the holidays — candidly, if you could just moderate your boozing through a little moderation you wouldn’t join the millions of hungover Americans that unsuccessfully go cold turkey in the New Year,” shares Jamie Fay, Founder and CEO of RationAle Brewing. “We’re here to say, ‘Screw Dry January — keep drinking the beer you love, without the shame and guilt that comes with over-drinking alcohol.’ By making moderation taste good, accessible and affordable, there’s no excuse to choose a non-alcoholic beer alongside your favorite alcoholic beer in the quest to scale down your boozing.”

In addition to the offer to buy two six packs for the price of one (code: BYFAB), RationAle is running a campaign to bring light to the alter-egos that tend to come out when folks have had ‘one-too-many’ drinks. During the month of January, fans can take a quiz on RationAle’s website to determine which alter-ego comes out, and shed light on why they may need a ‘RationAle Moment.’

Fans can see whether they and their friends are one of eight alter-egos, like a “Sloppy Sam,” “Hungover Hayden,” or “Somewhat-Sober Skylar.” Visit http://www.rationalebrewing.com to learn more.

Launched in late 2021, RationAle has added variety, flavor and innovation to the fast-growing U.S. non-alcohol beer category, providing brew-loving consumers with delicious options to enjoy craft beer in moderation. All of RationAle’s completely-crushable, non-alcoholic craft brews are made in small batches with high-quality ingredients, maintaining the bold, refreshing taste of traditional craft beer.

To learn more and shop for RationAle Brewing, visit http://www.rationalebrewing.com.

RationAle Brewing™ offers an innovative variety of small-batch, non-alcoholic craft beers for those seeking to embrace moderation while drinking consciously and living boldly. Founded in 2021 by Jamie Fay and officially launching into the non-alcohol craft beer category in early 2022, RationAle is rooted in embracing moderation without sacrifice, quickly establishing itself as the official beer of moderation. RationAle’s four brews without booze are produced using a proprietary distillation technology to gently remove alcohol from the brewed beer, with minimal effects on its integrity and overall quality.