Using a frame-level API to the NVIDIA NVENC hardware video encoder, Beamr reduces video bitrates by up to 50% with no loss of quality 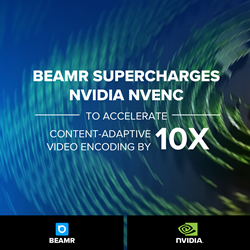 By collaborating with Beamr, we made the NVENC API much more flexible, enabling it to run multiple passes and achieve unbounded quality for Beamr's CABR.

Beamr’s patented, Emmy® award-winning CABR engine enables reducing the bitrate of video streams by up to 50% over the current state of the art encoders without compromising perceptual quality. The reduced-bitrate streams remain fully standards-compliant, and can be decoded by any standard video decoder. NVIDIA has added a frame-level application programming interface, or API, which enables Beamr’s CABR to determine the optimal tradeoff between bitrate and quality and significantly reduce the bitrate of video streams. Beamr has also refactored its CABR technology to run on NVIDIA GPUs at ultra-fast performance, matching the performance of NVIDIA NVENC, enabling 10x more cost efficiency than software-based content-adaptive encoding.

“Beamr has been optimizing images and videos for the past 10 years, resulting in reduced storage and delivery costs, and an improved user experience for our customers,” said Sharon Carmel, Founder & CEO of Beamr. “The increase in video quality with the shift to 4K and 8K, and the increase in the amount of video with applications such as smart cities, automotive and user-generated content, require new levels of video optimization performance, which are available only with hardware encoders. We selected the NVIDIA NVENC hardware video encoder due to its high quality and extreme performance, and are grateful to the NVIDIA team for working closely with us on adapting the NVENC APIs to enable frame-level access to the video encoding engine.”

“NVENC has been adopted for a wide variety of use cases from video editing tools to virtualization hypervisors, user-generated content and cloud applications,” said Andrew Page, director of advanced technologies in the professional visualization group at NVIDIA. “By collaborating with Beamr, we made the NVENC API much more flexible, enabling it to run multiple passes and achieve unbounded quality for Beamr's CABR.”

About Beamr
Beamr serves the world's top Pay TV and OTT video service providers as the leading designer and developer of content-adaptive encoding and optimization solutions that enable high quality, performance, and new levels of bitrate efficiency. Backed by 51 granted patents, and winner of the 2021 Technology and Engineering Emmy® award and the 2021 Seagate Lyve Innovator of the Year award, Beamr's perceptual optimization technology enables up to a 50% reduction in bitrate with guaranteed quality. Founded in 2009, Beamr maintains offices in Los Gatos, CA, Herzliya, Israel, and St. Petersburg, Russia. For more information visit https://beamr.com.