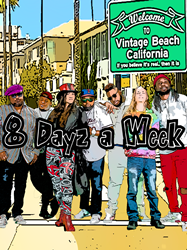 "8 Dayz a Week" is a revolutionary concept on television, as no other band is creating something like this.

What happens when seven musicians from wildly different backgrounds come together and form an unlikely friendship? The Rock and Flow group Shirlee Temper is what happens. And now the group is sharing all the hilarity of what ensues when their cultures collide in their hit series on ROKU, “8 Dayz a Week.”

Shirlee Temper, the band featured in the series, is an Oakland-based group comprised of seven musicians from very different backgrounds. The group has dubbed their sound Rock and Flow, a blend of rock and funk similar to the style of Sly & the Family Stone.

Reminiscent of the 60s hit “The Monkees,” “8 Dayz a Week” is an animated motion comic series that follows a group of musicians, who similar to Shirlee Temper, differ in age, culture, and musical genre. The musicians form an unlikely friendship in the Bay Area fictional town of Vintage Beach, CA, and the series follows the band’s antics while also featuring a music video by Shirlee Temper.

“‘8 Dayz a Week’ is a revolutionary concept on television, as no other band is creating something like this,” said Angela Taylor, Executive Producer. “The hang-out style series blurs fiction and reality while featuring the real-life band Shirlee Temper and what happens when bandmates and friends from very different cultures come together in the pursuit of chasing their musical dreams. Viewers of all ages will enjoy the animated series and get plenty of laughs following the group’s journey while enjoying the band’s unique Rock and Flow sound.”

“8 Dayz a Week” is produced by Creative Veinz. Audiences can watch the animated series on the Shirlee Temper channel on ROKU. Fans can follow the band @shirleetemper on Instagram, Facebook and TikTok to stay on top of the band's latest news.