Afro-Cuban funk phenom Cimafunk makes his highly anticipated return to Tampa for a one night only performance in Ybor City at the Cuban Club on October 14. Tickets go on sale Friday May 20. 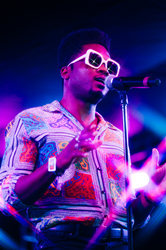 Afro-Cuban funk phenom Cimafunk makes his highly anticipated return to Tampa for a one night only performance in Ybor City at the Cuban Club on October 14. The Tampa appearance will be the last show of his El Alimento Tour of the United States. Cimafunk last Tampa performance was in February at the Gasparilla Music Festival and has been one of the most highly acclaimed performances in the festival’s 10 year history. Tickets go on sale Friday May 20th and proceeds from the concert benefit the Gasparilla Music Foundation’s Recycled Tunes program and Tampa’s community radio station 88.5 WMNF.

Cimafunk grew up in Pinar del Rio two hours west of Havana, Cuba. After initially studying medicine for two years in his hometown, he moved to Havana to pursue a career in music. His monumental second album El Alimento was released in October 2021, receiving overwhelming praise. Rolling Stone ranked it #3 of the Best Spanish-Language and Bilingual Albums of 2021 and #23 of the 50 Best Albums of 2021. El Alimento was also among NPR’s Best Latin Music of 2021and #1 of Le Monde’s Latin Music favorites. His music masterfully blends Afro-Cuban sounds and rhythms with global funk, hip hop and soul. His live show is often been compared to James Brown and has been described as a “mind-blowing non- stop dance party” by Music Fest News.

What others are saying
Cimafunk collaborator George Clinton says “he is the one, the next one.” Chucho Valdés credits him with “uniting Afro-Cuban and African American.” Fito Páez calls him “the future.” According to The New York Times, Cimafunk is on “Quest to Create One Nation Under a Groove.” NPR asserts he’s on his way to “world domination by way of the funk and clave.” Rolling Stone describes his music as “an electrifying combination of funk and soul, layered over the five-beat clave, or the heartbeat of Cuban music, brought to Cuba by enslaved people from West Africa.”

About 88.5 WMNF
WMNF is a listener-supported community radio station that celebrates cultural diversity and is committed to equality, peace and economic justice. WMNF provides broadcasts and other forums with a grassroots local emphasis, that promote creative, musical and political vitality. WMNF continues to be volunteer-powered and listener-sponsored, providing the listening community with eclectic music as well as non-mainstream news, views and public affairs programming. Thanks to all the wonderful WMNF volunteers, staff, board of directors and more than 10,500 listener-sponsors! WMNF is a 7000 watt non-commercial, listener supported community radio station, licensed to the Nathan B. Stubblefield Foundation, a non-profit organization established solely to operate WMNF. WMNF is a section 501(c)3 charitable organization. All gifts and donations are tax deductible in accordance with the law.

About Recycled Tunes
Recycled Tunes is a program started in 2014 by the 501(c) (3) non-profit Gasparilla Music Foundation which provides new and refurbished instruments, repairs and music related equipment to local Title 1 schools and children's music programs. In 2021, the program provided 719 instruments, repairs and equipment to 42 schools in Hillsborough County. Recycled Tunes is made possible with proceeds from the annual Gasparilla Music Festival and its Higher Ground members along with support from Hillsborough County and the State of Florida. For more information about Recycled Tunes, please send an email to recycledtunes@gasparillamusic.com